Digital showcases and audiences of livestream cameras have made this fashion season a memorable one, and the big finale of Paris Fashion Week certainly brought an added level of wonder.

From comfy clothes to whimsical sets, the designs had just the right energy to bring a scattered audience together.

Runways and video streams alike were populated by a mixture of styles. Rokh used collars, sleeves, and bodice styles from various centuries to create powerful, warrior looks, while Hermès filled their show with the textured luxury of smooth leather separates and suede whipstitch jackets. Other labels drew inspiration from time spent at home, with Lutz Huelle featuring rose satin pyjamas that work as comfortable home wear or, when paired with their denim pieces, would be perfect for a cocktail party. With this line, he hopes to ‘transport the idea of the coziness and security of home into the outside world’.

Out-of-the-box thinking was on full display as many labels experimented with how to make their non-physical presentations immersive. With a bright pink stadium set and a runway full of jerseys, Miu Miu paid tribute to the world of athletes in honour of the parallel desires of the fashion and sport industries to perform spectacles for an engaged audience. Videos of Miu Miu fans filled the walls, livestreaming their reactions to creative director Miuccia Prada’s paradoxical blend of streamlined sportswear and embellished evening wear. Meanwhile, Loewe distributed their colourful and theatrical collection through a series of life-sized posters designed by artist Anthea Hamilton. This ‘Show-on-the-Wall’ came with a DIY kit that included wallpaper, glue, and a brush so viewers could hang the posters and participate in the creative process. Both brandswere aiming for a blend of fantasy and reality, and we certainly think they delivered. 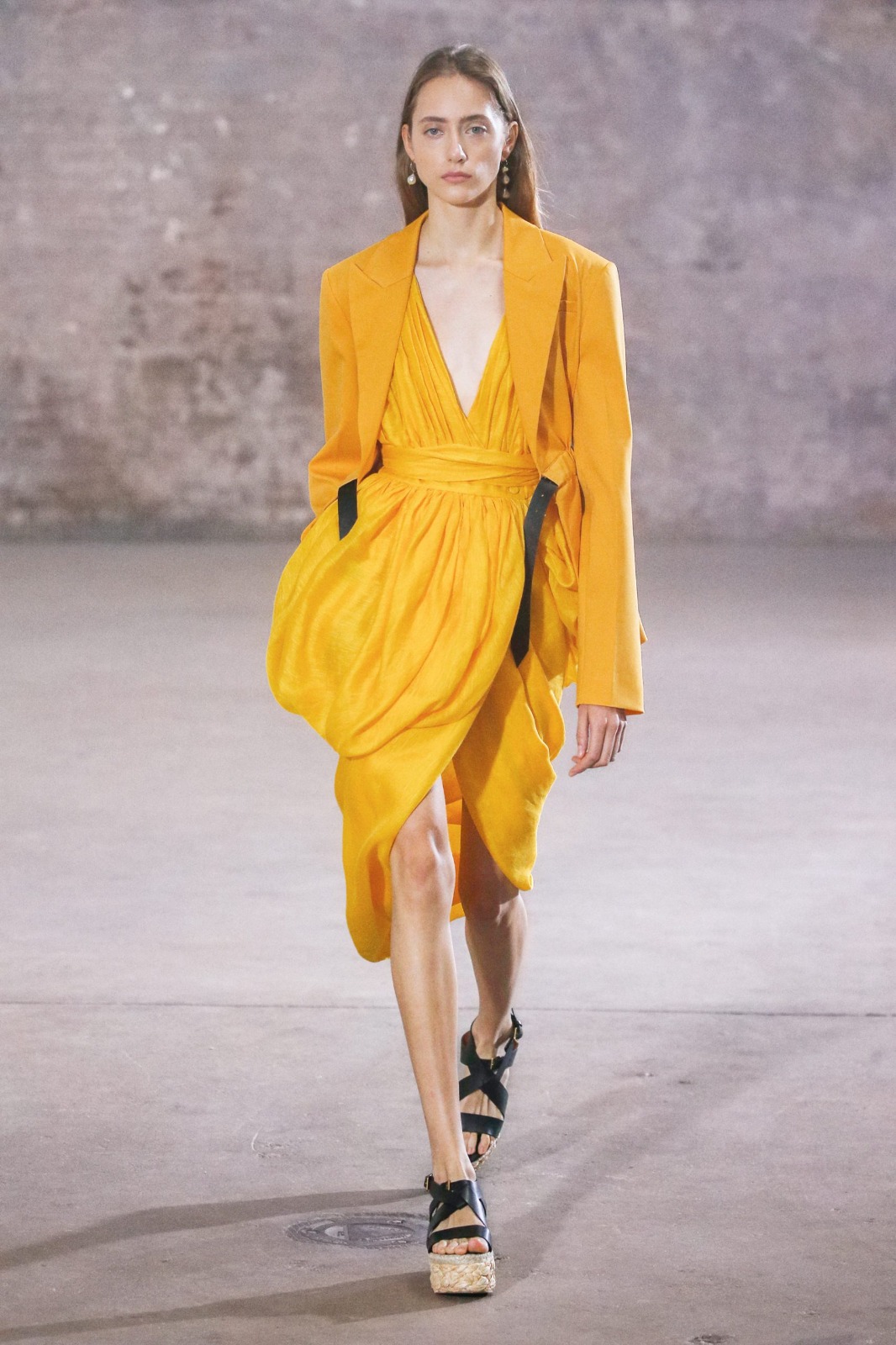 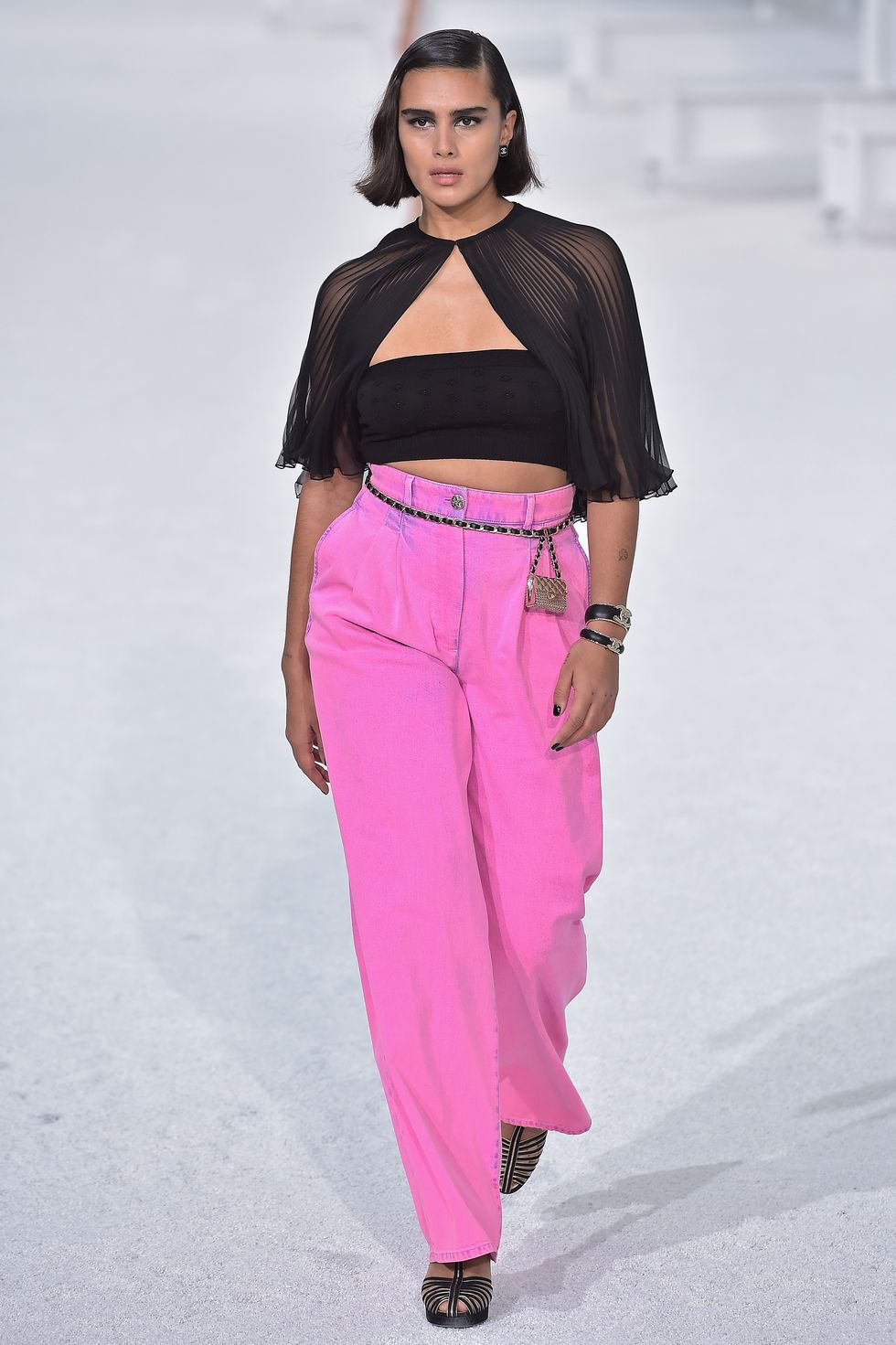 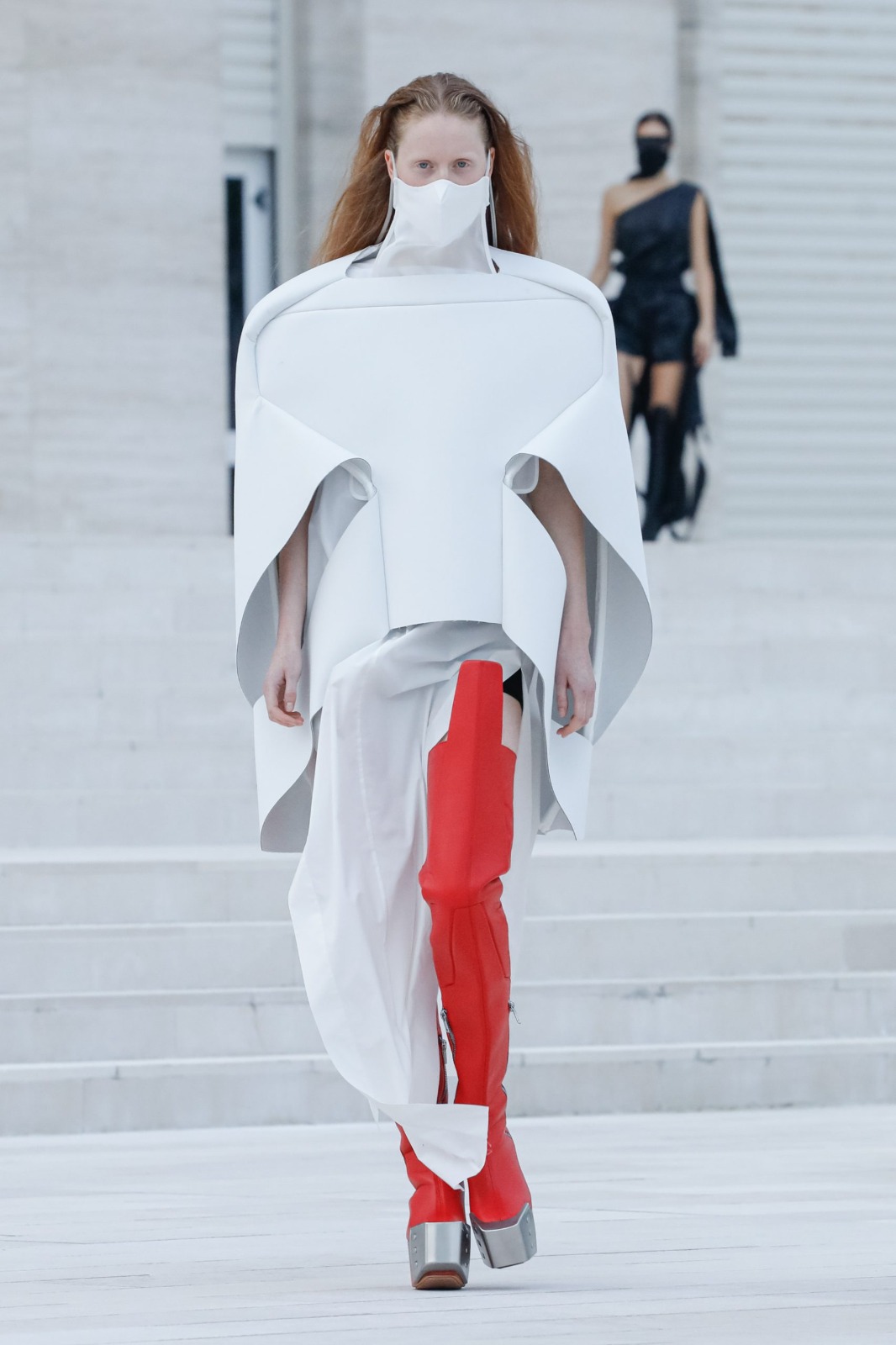 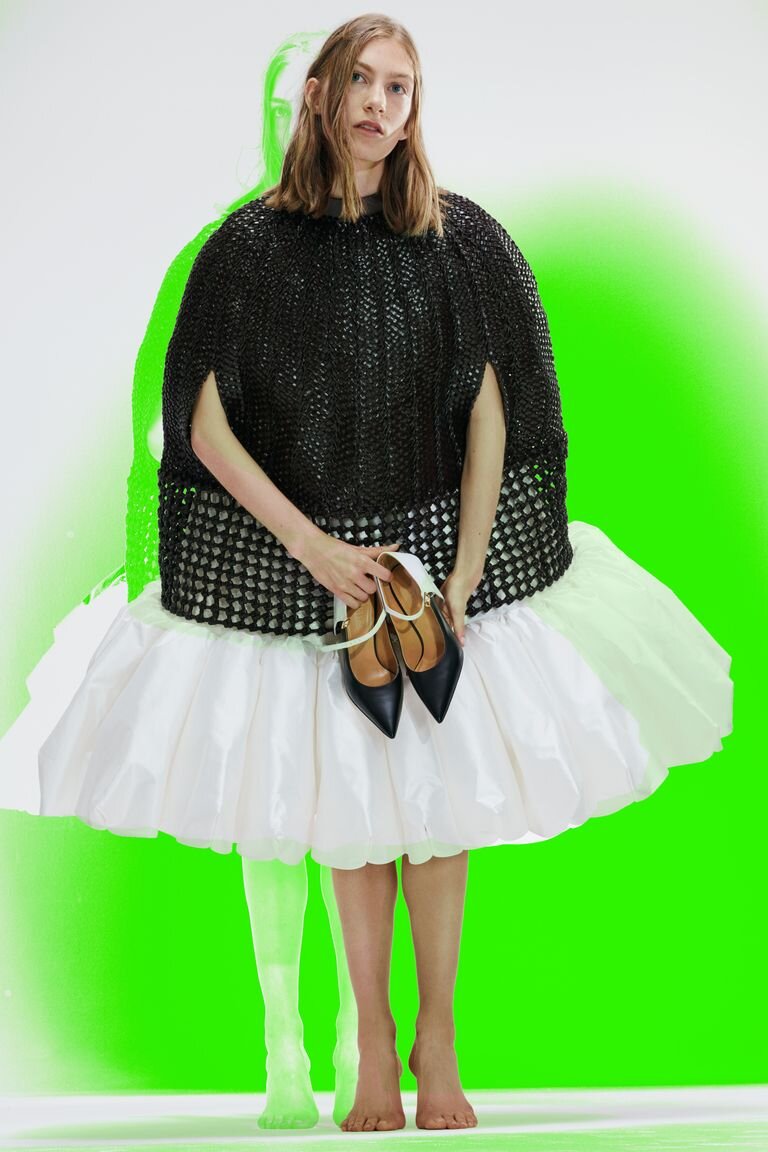 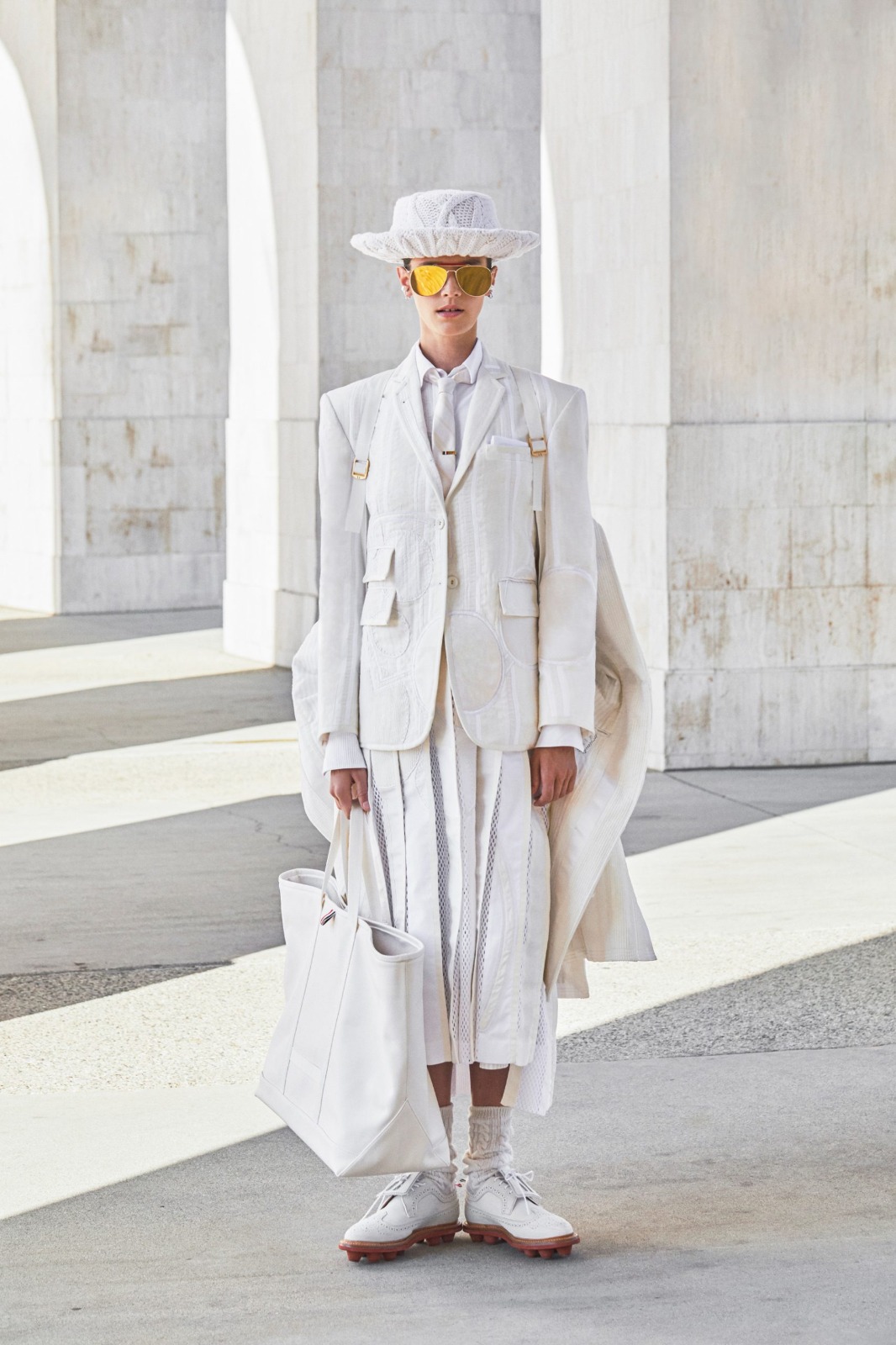 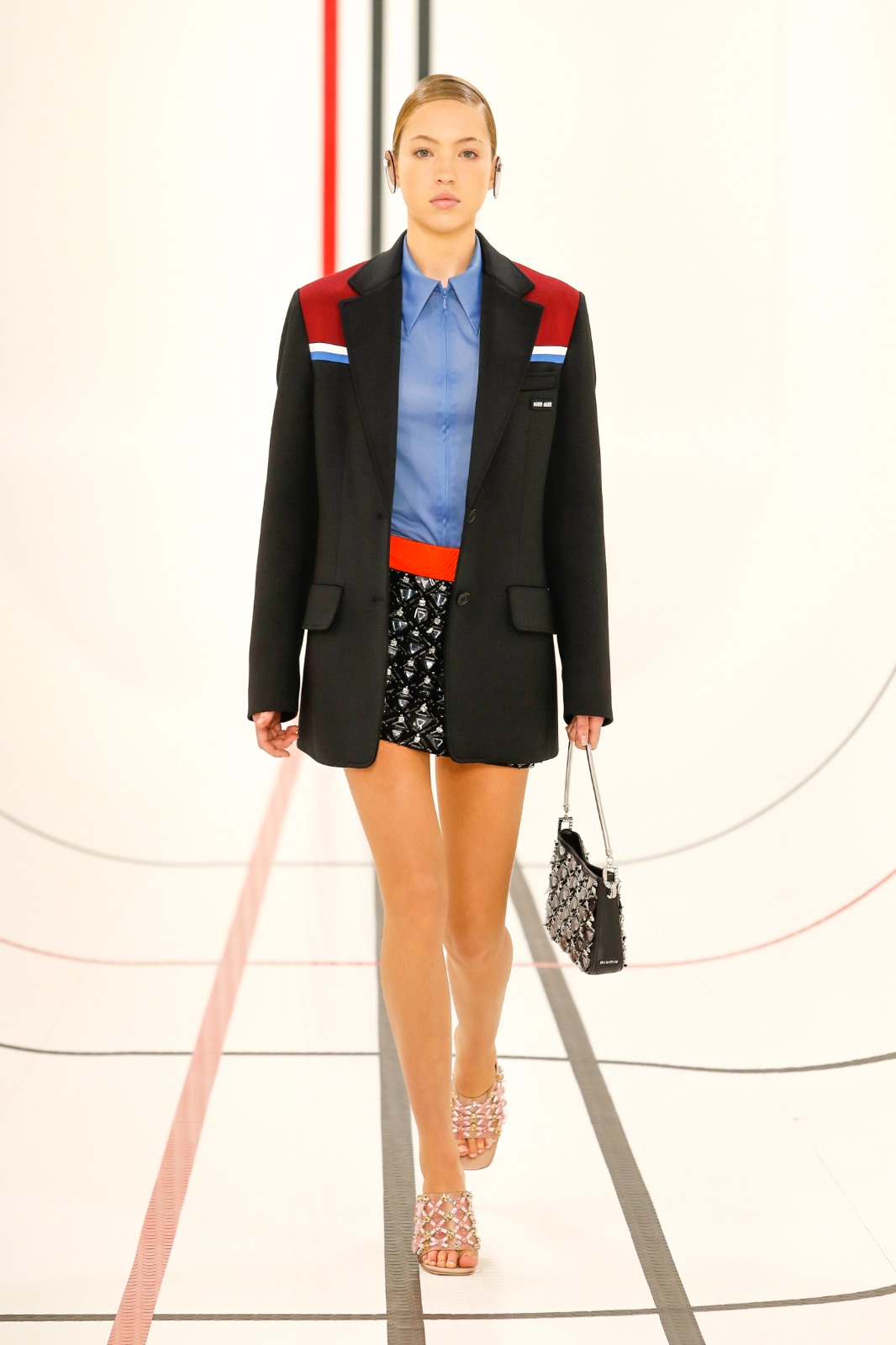 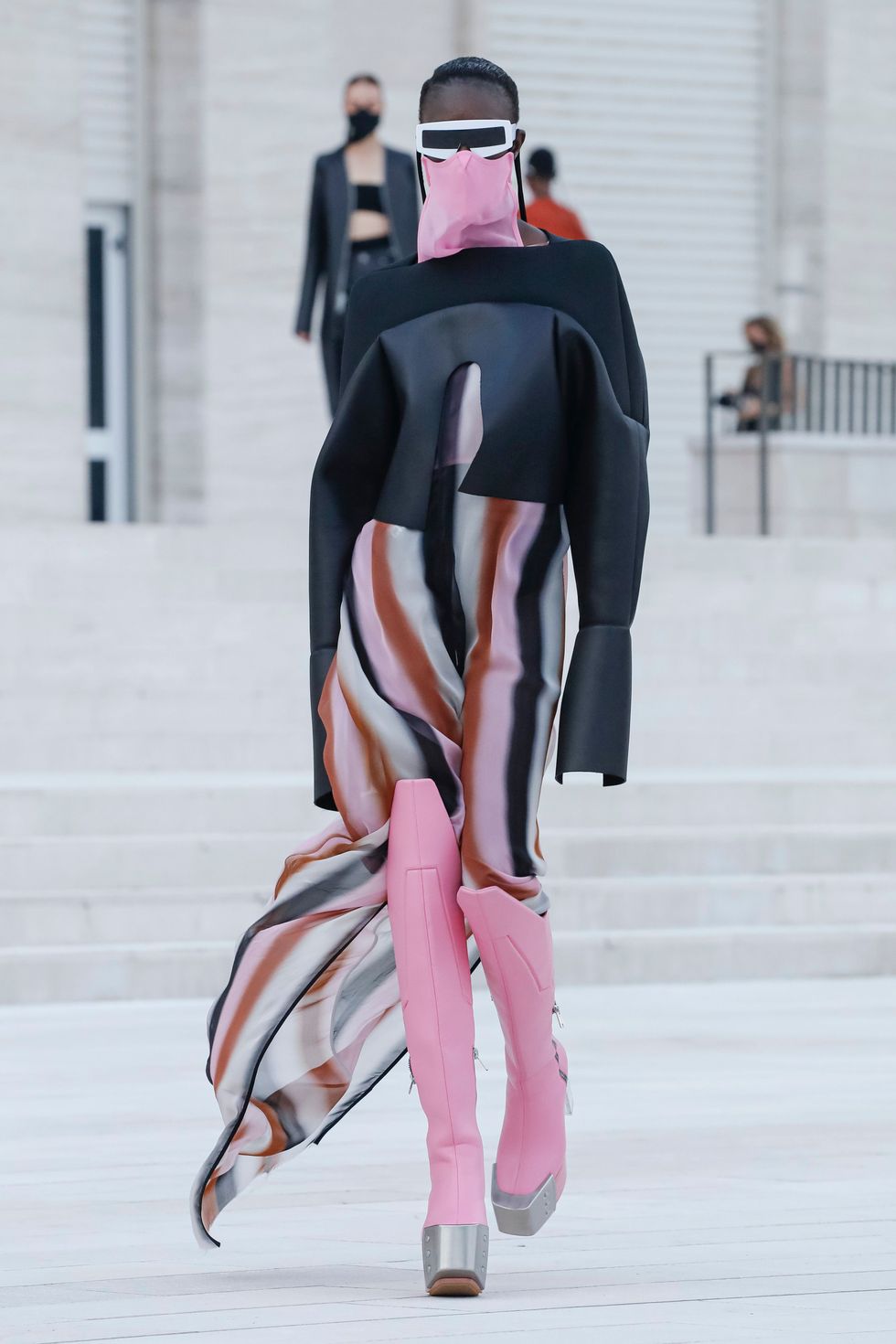 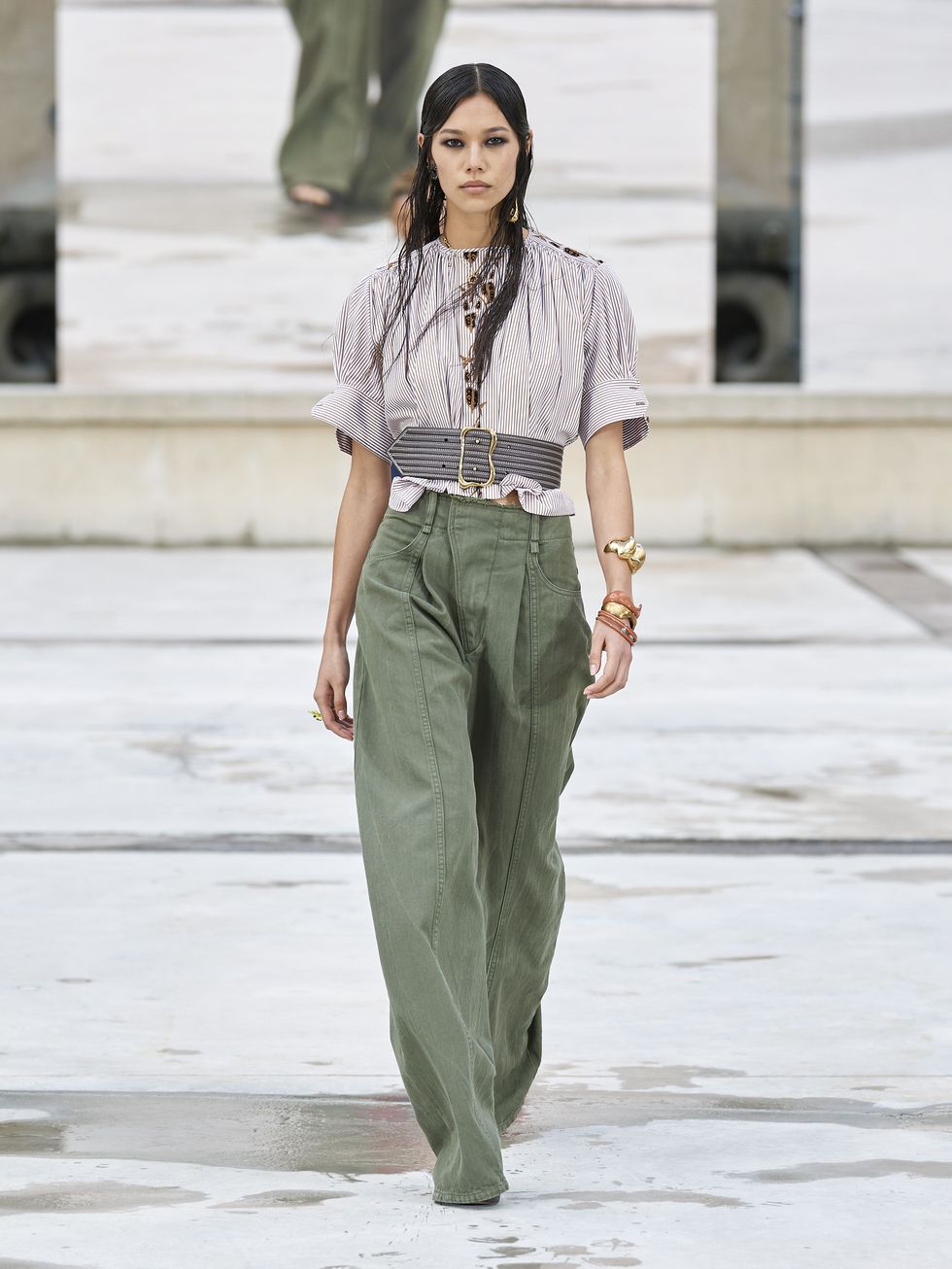 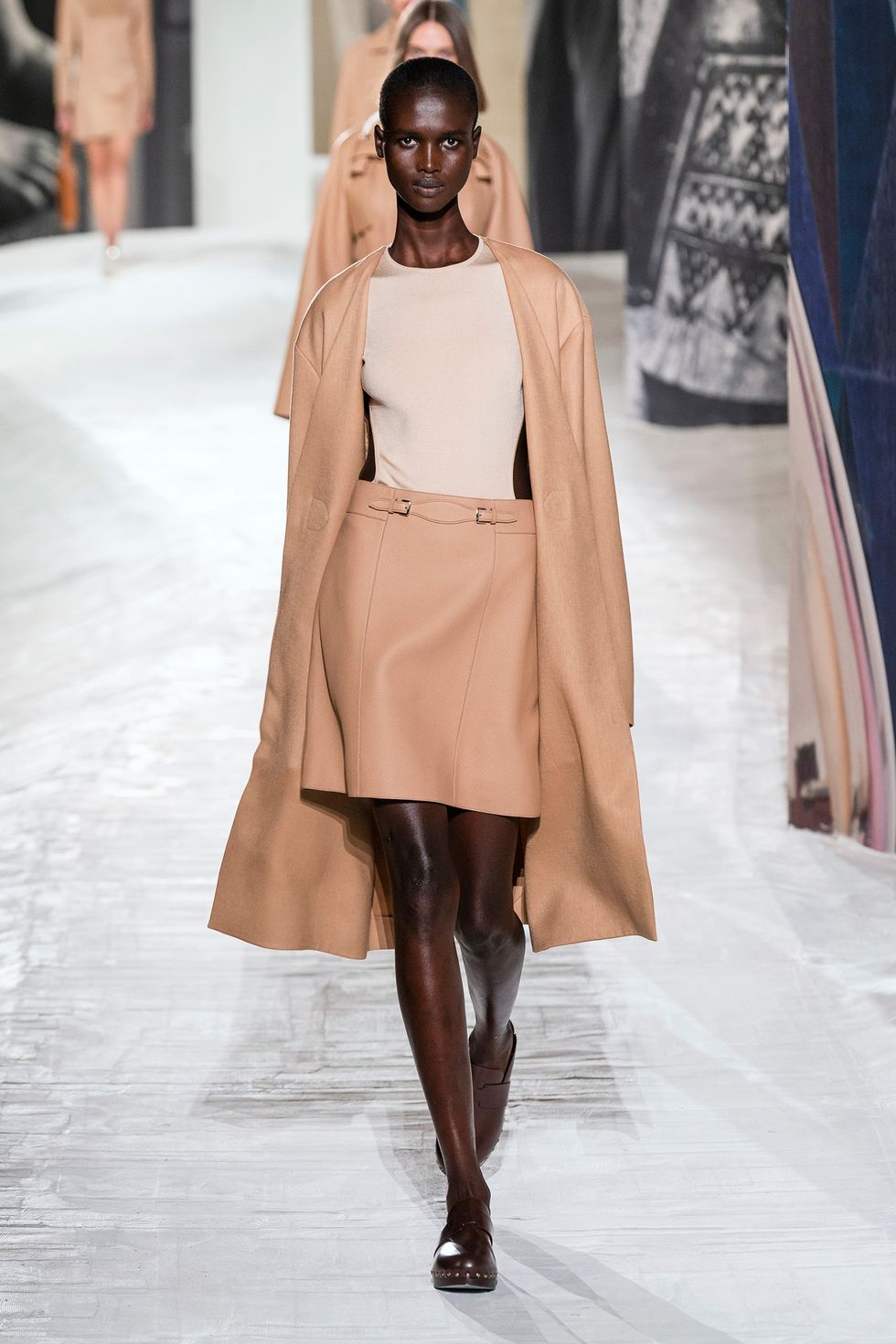 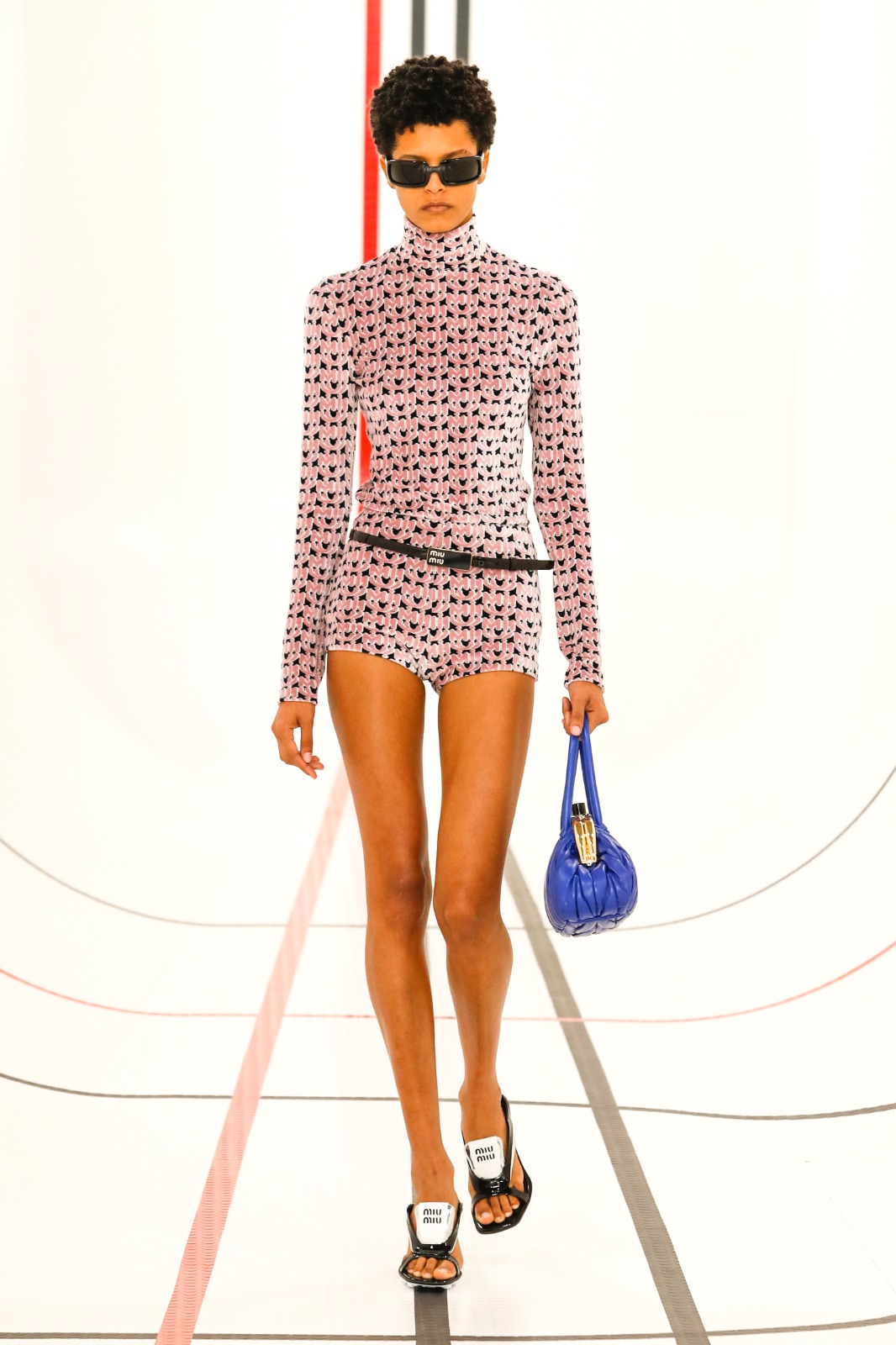 Sometimes it’s nice to kind of escape into clothing.

The big issues of fashion were also woven into the shows. Sustainability was on the mind of many designers, with multiple labels featuring upcycled materials and clothing, including one leather skirt by Balenciaga that creatively spliced together a patchwork of old boots, purses, and motorcycle pants. Other brands drew on fashion’s move to embrace gender neutrality. Matthew Williams, in his first show with Givenchy, presented bold, tailored coats alongside powerful, fitted silhouettes. In the final show of PFW, Louis Vuitton’s eighties-inspired looks were presented without gender assignment, featuring oversized t-shirts and large graphic prints. Though it was one of the few runways held in person (in the gorgeous La Samaritaine department store), creative director Nicholas Ghesquière was still excited to stream the show online using cameras recording directly from audience seats, seeing it as ‘another step towards globality’.

It’s been a new and exciting year for Fashion Weeks, but one that we at Casper Magazine hope isn’t too unique. Fashion-lovers around the world have been given unprecedented access to the biggest events on the fashion calendar, and though we can’t wait until everyone can put on physical shows again, we hope you’re as excited as we are that it may have gotten just a little bit easier for us all to feel part of it.

We also noticed many women attending PFW in person this year sporting a glamorous fusion of victory rolls and finger waves in their hair: read a reflection from our founder, former hairdresser and stylist Milla Maria, here.