The Virgin Australia Melbourne Fashion Festival (VAMFF) is coming to a close, with last Thursday’s Grand Showcase cementing this year as one of the Casper Magazine team’s favourites.

Toni Maticevski’s solo show was dramatic, grounded, and beautiful, and the warm reception he received from his ‘home audience’ made the show a fitting honour for one of Australia’s best designers. From long, ruffled gowns to structured pantsuits, Maticevski’s collection was elegant and cohesive, his unique aesthetic quickly becoming a highlight of the festival.

As an Australian designer, Maticevski has expressed his love of showing collections in his home country, finding the experience humbling through the audience’s sincere engagement with his work. Our founder, Milla Maria, encountered this humble nature first-hand before the showcase, where she was able to speak briefly to the designer during the final rehearsal. Congratulating Maticevski on his accomplishments and expressing her anticipation for his show, Maria found him incredibly gracious and grounded, both excited and nervous for the impending show. 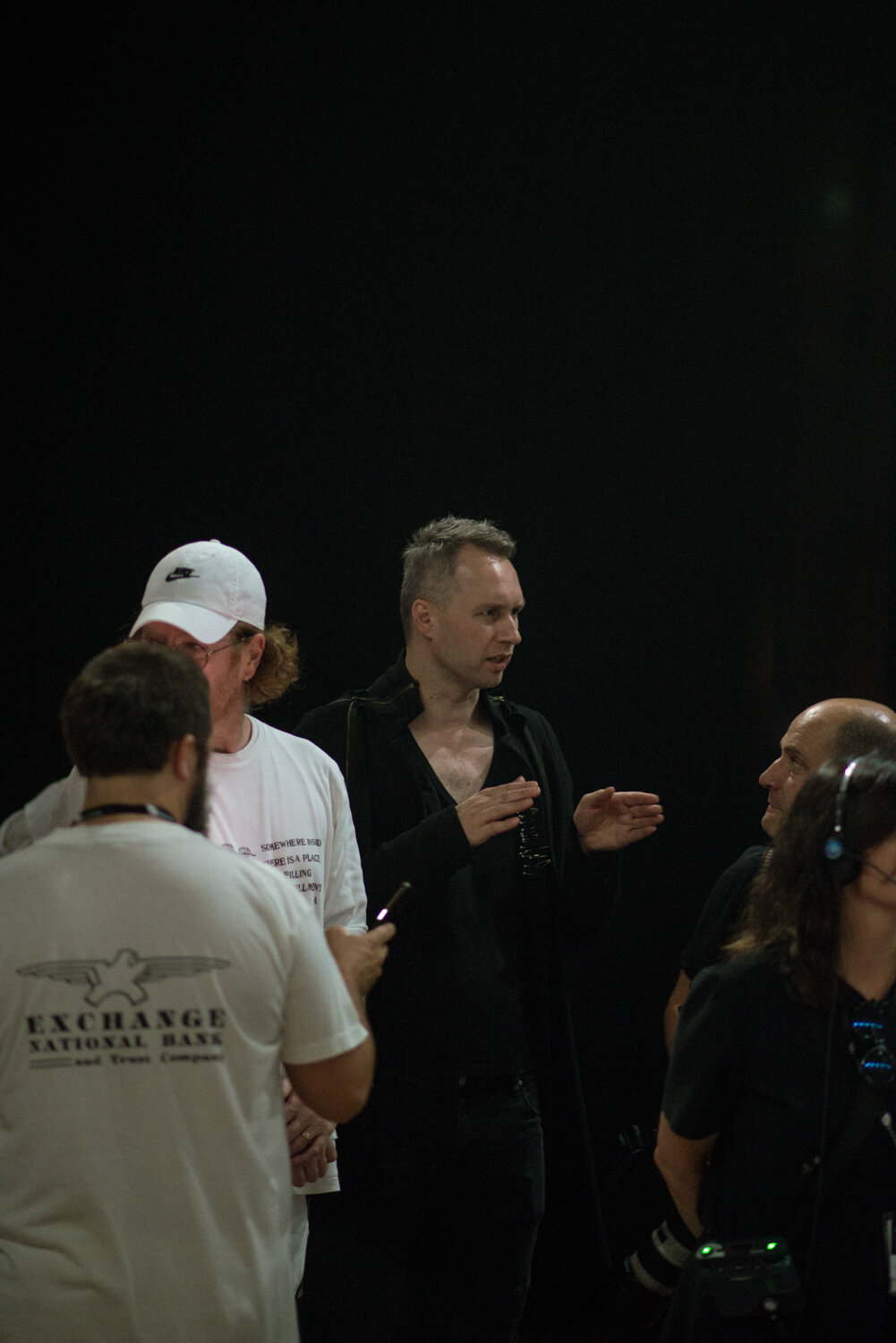 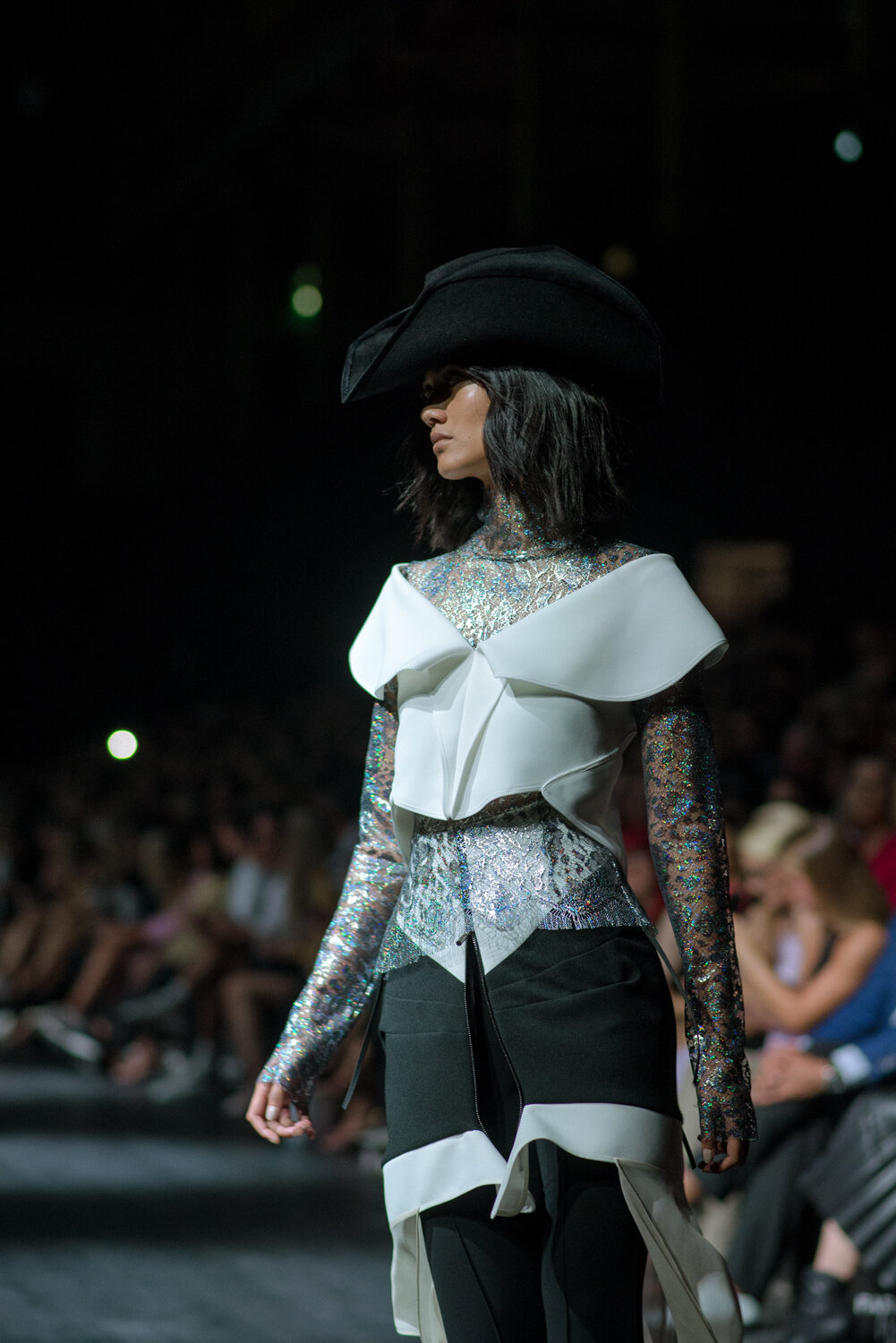 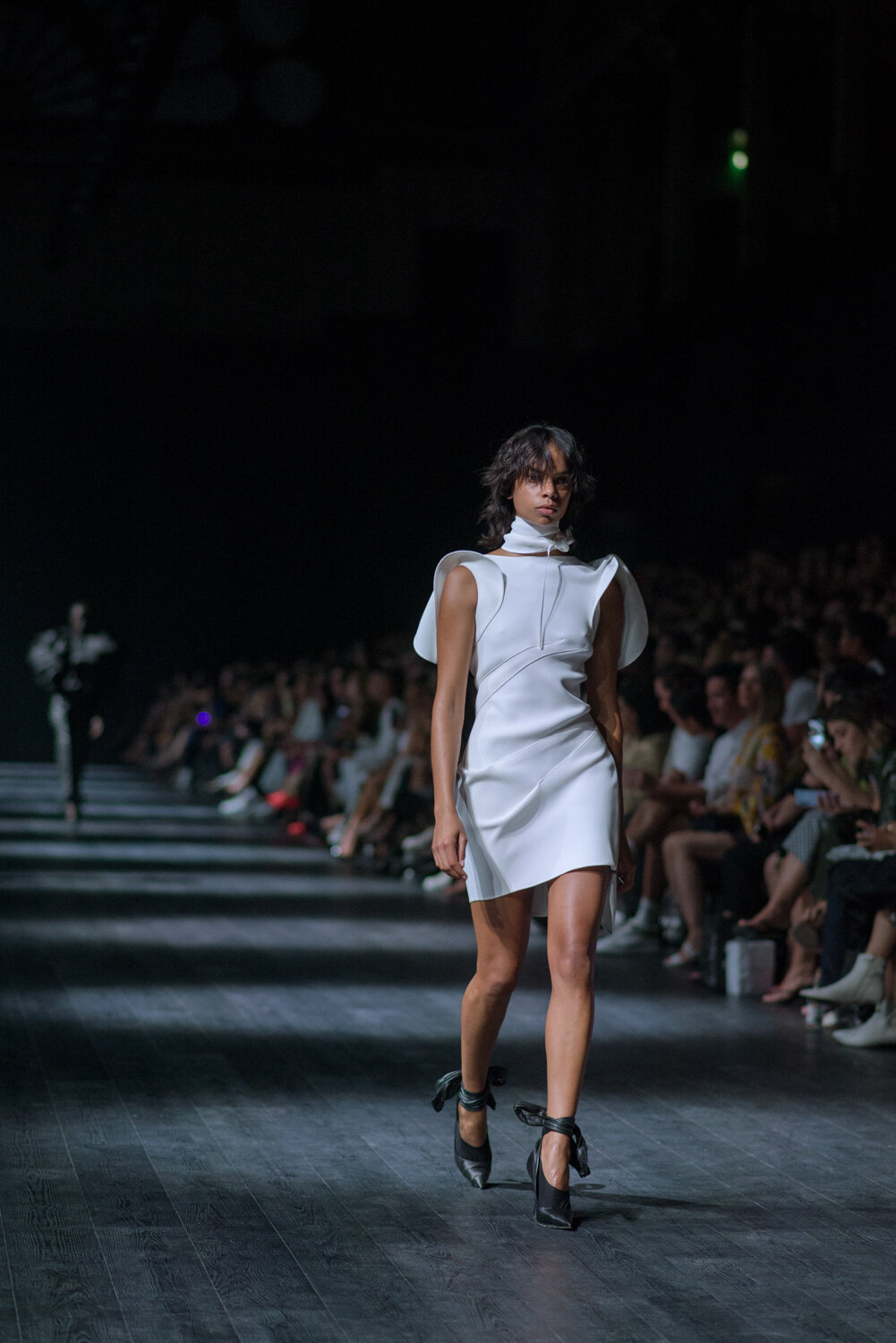 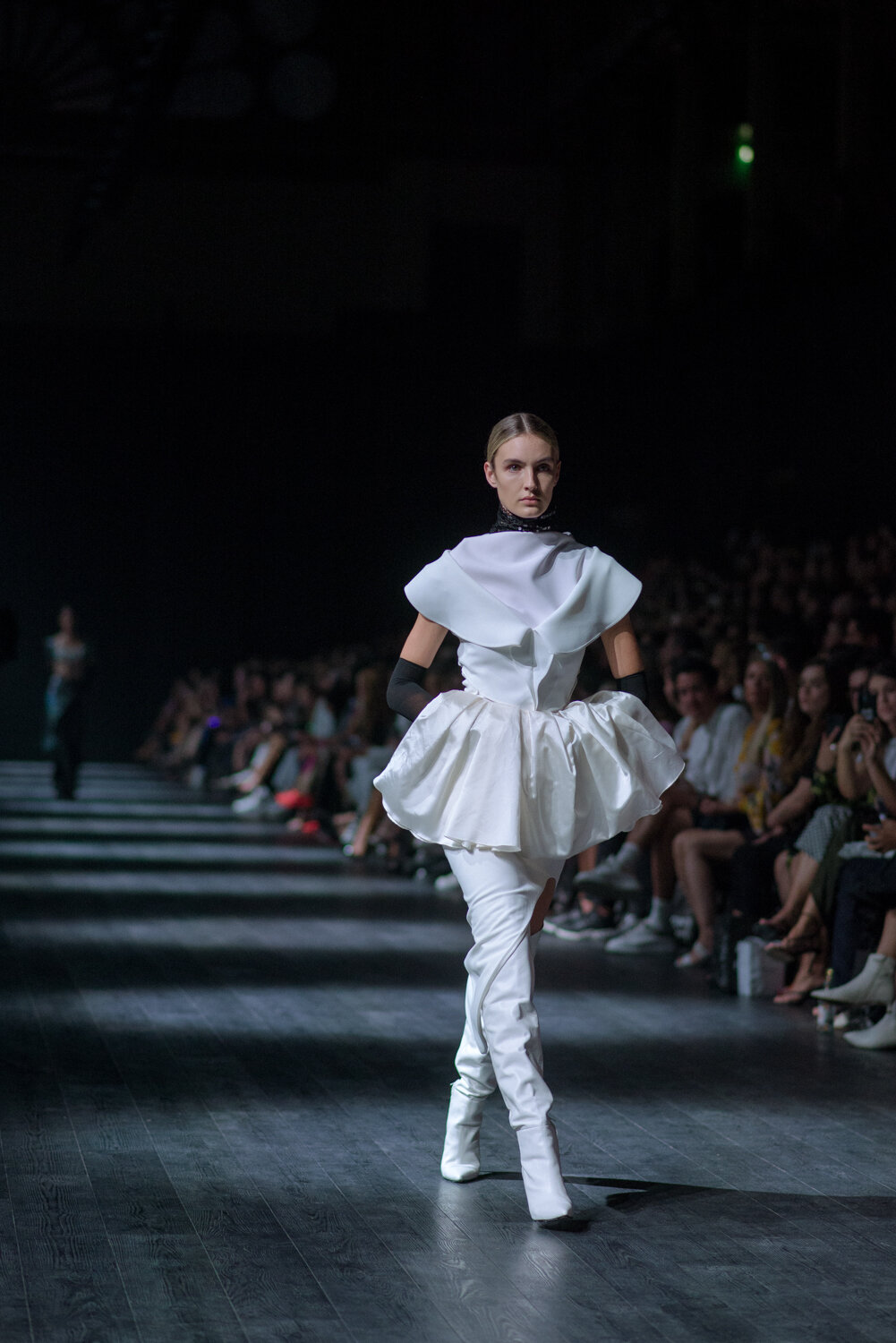 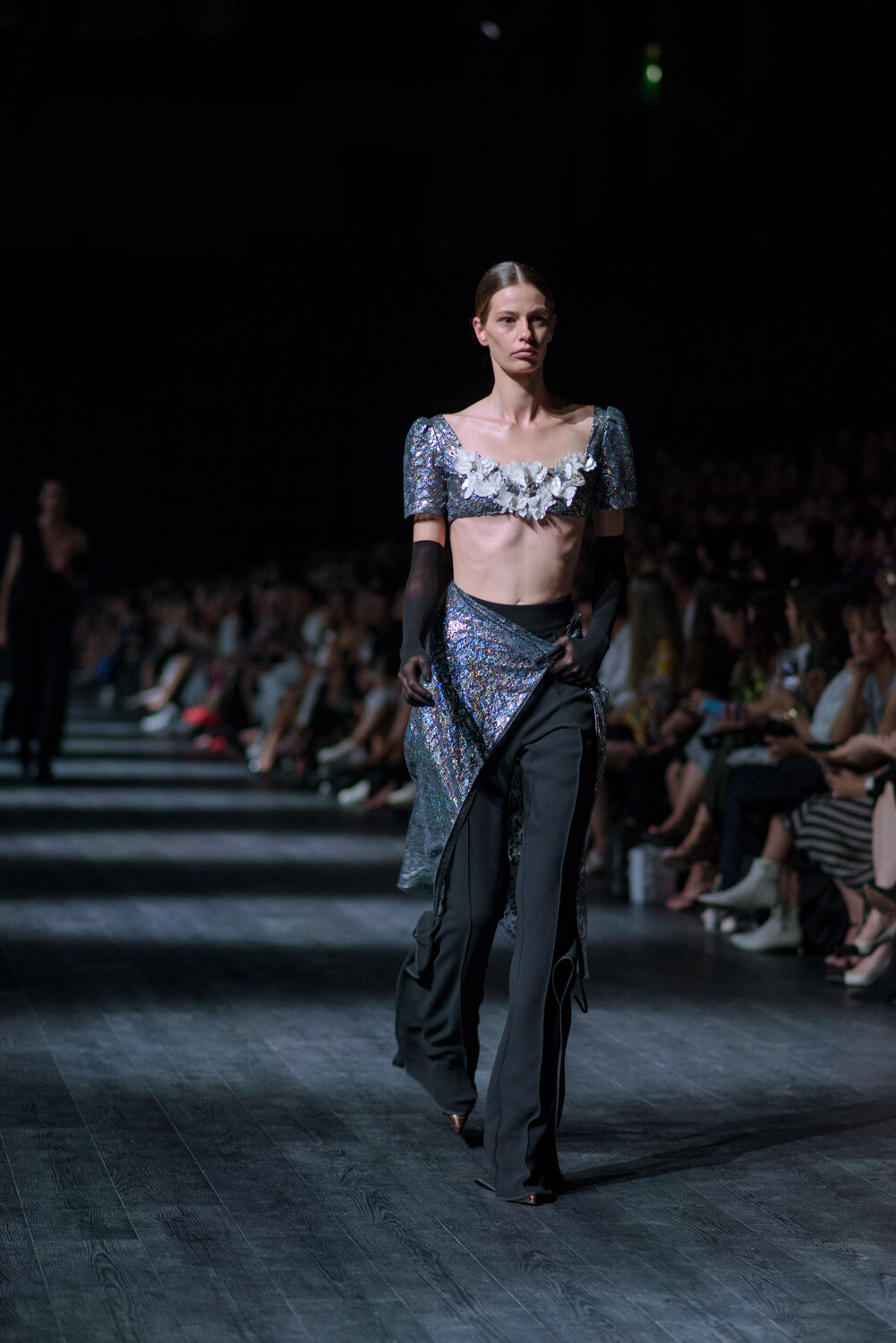 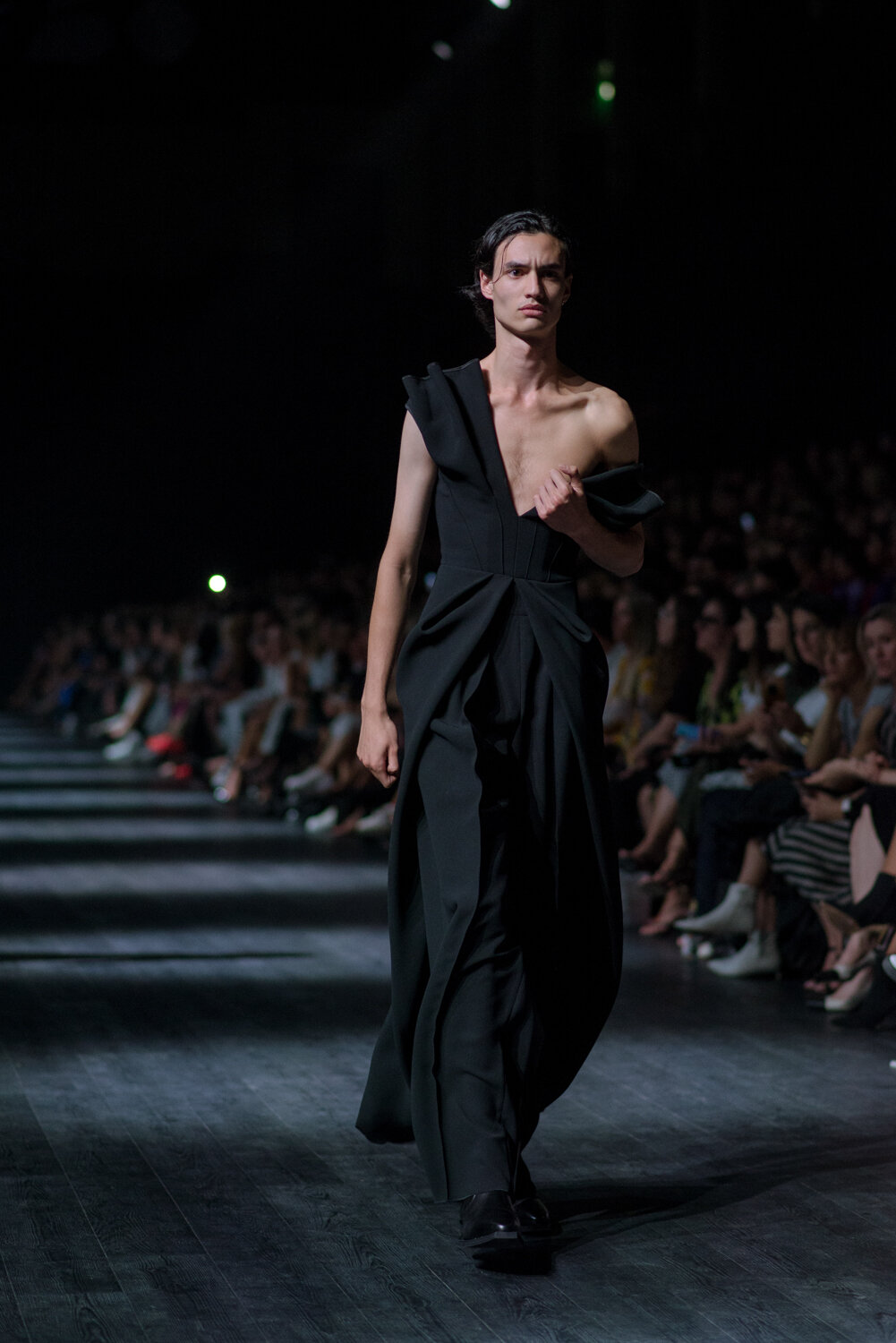 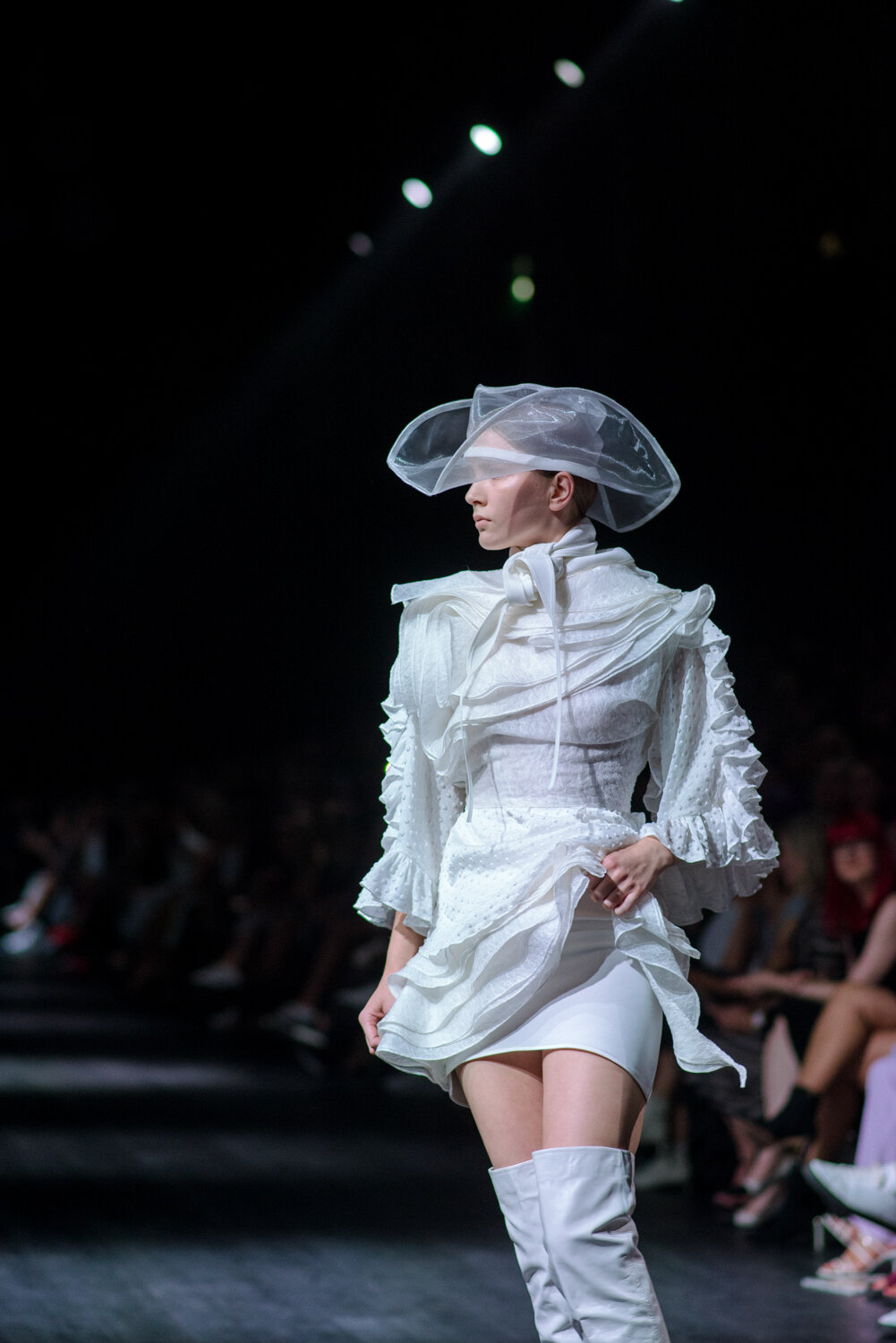 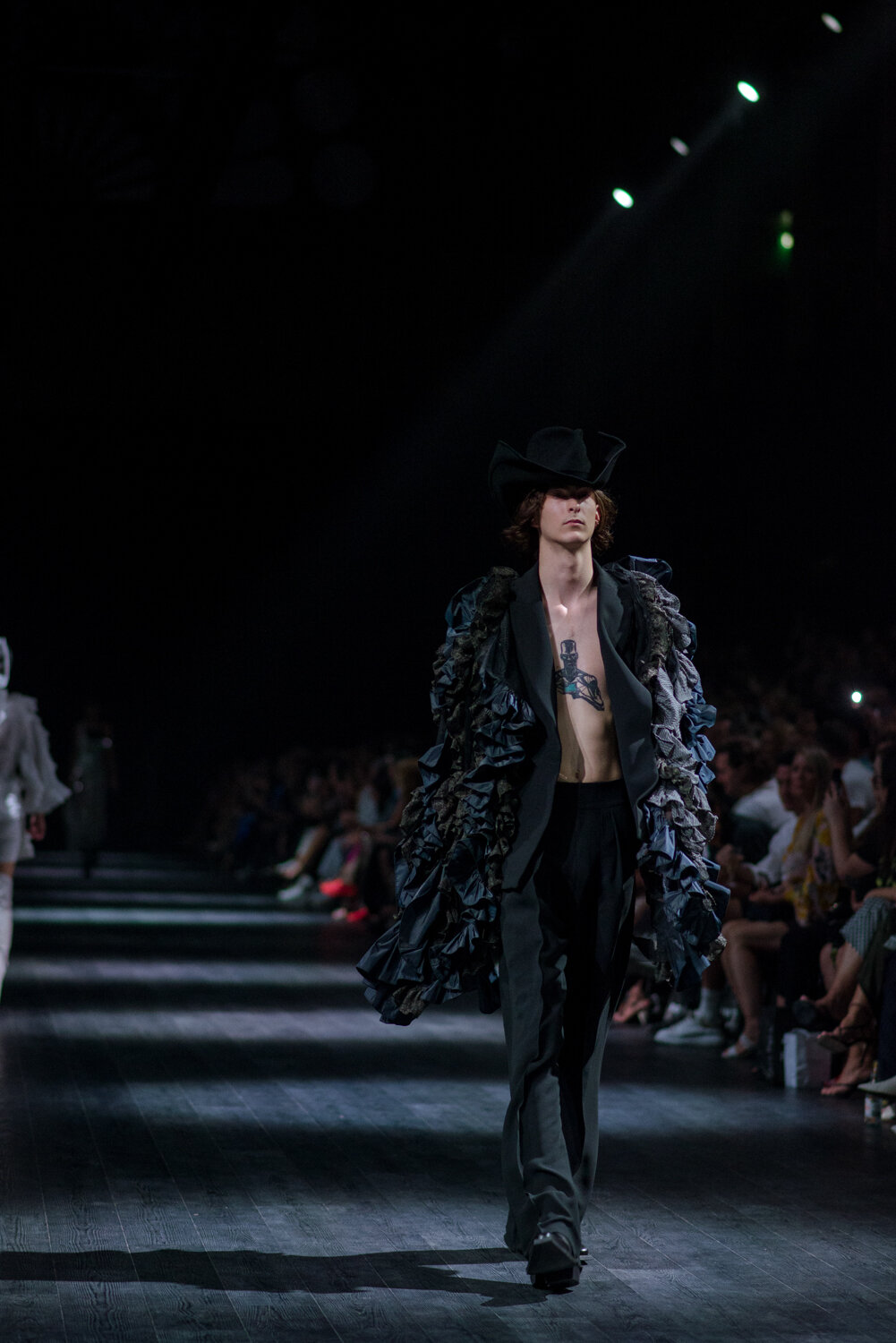 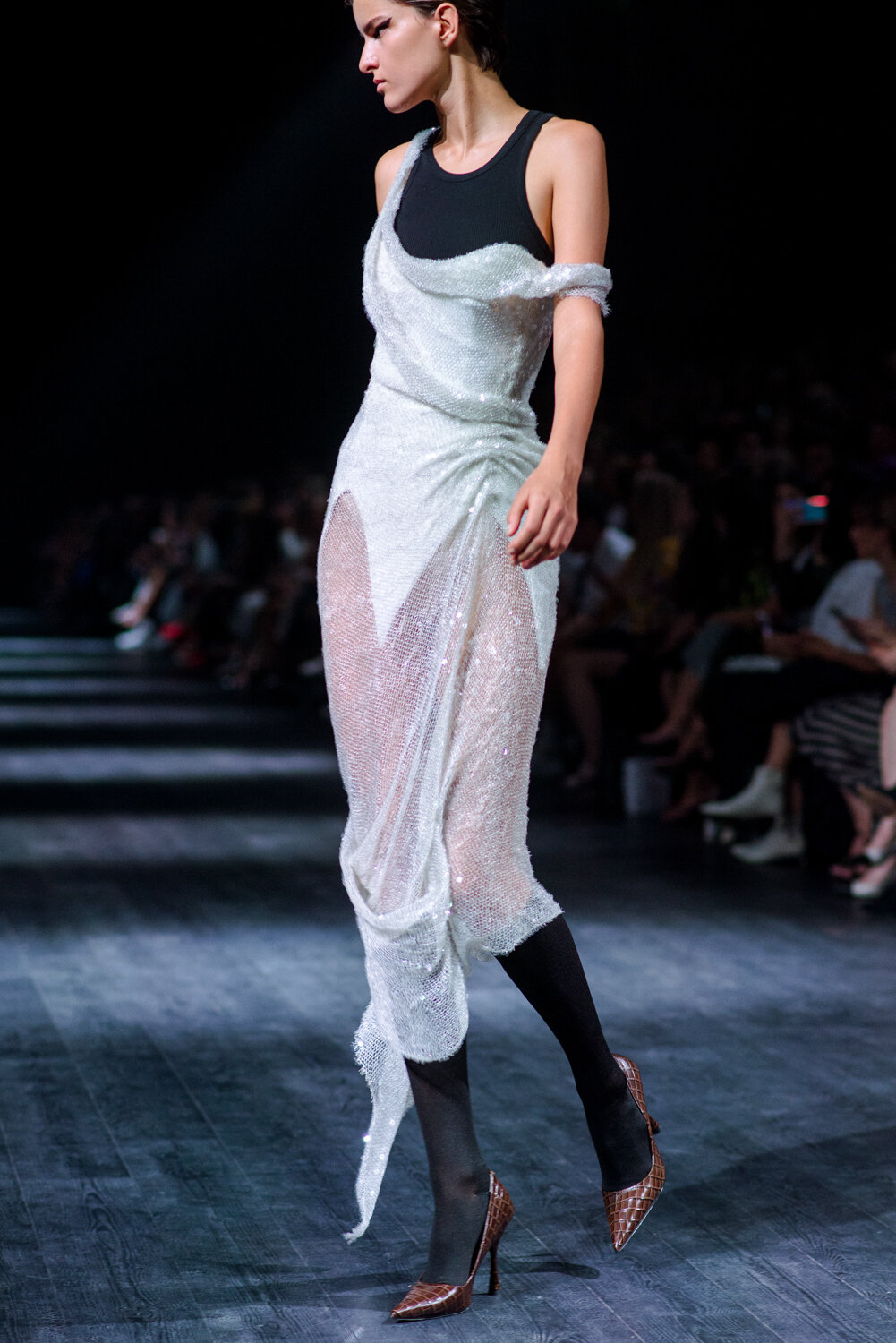 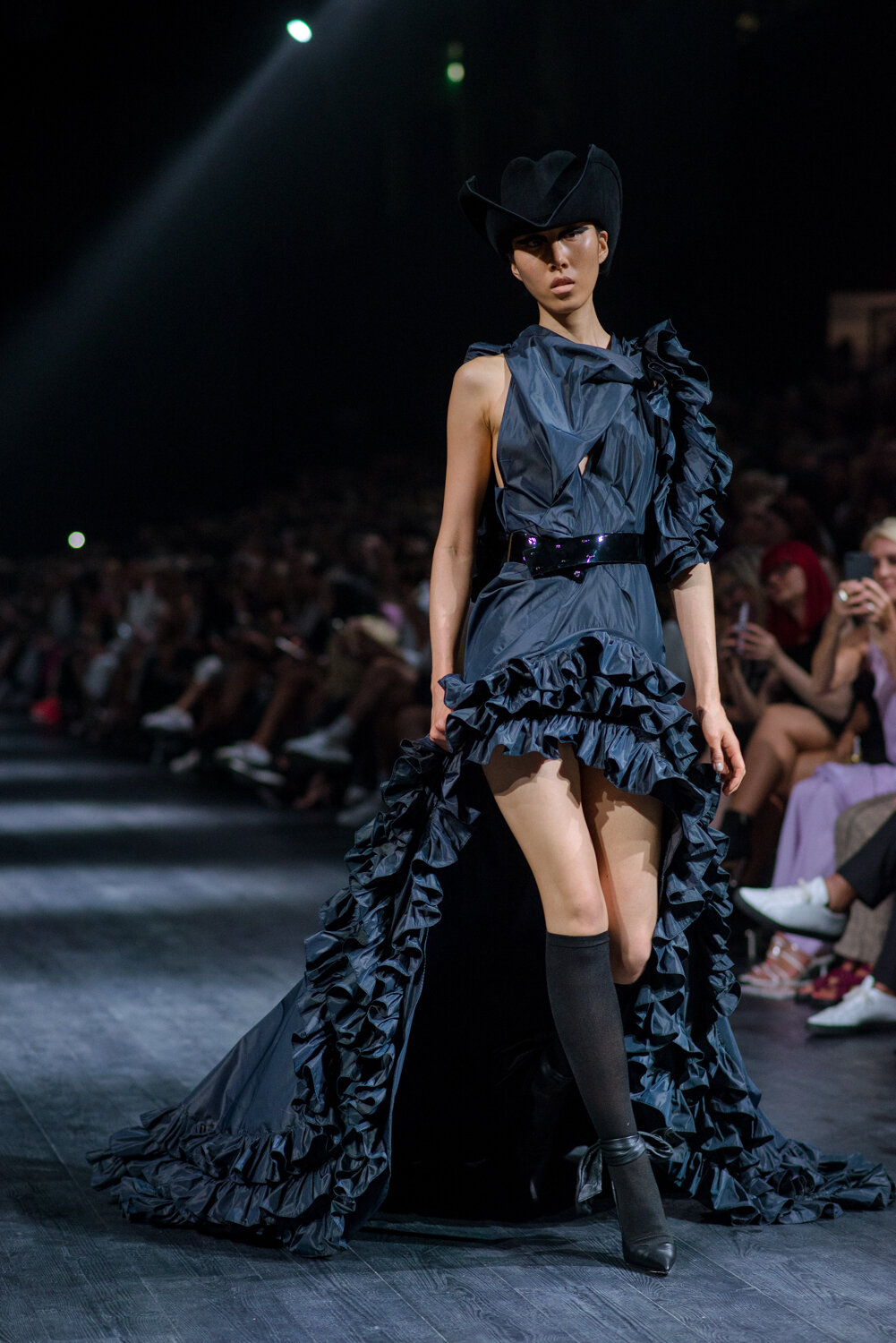 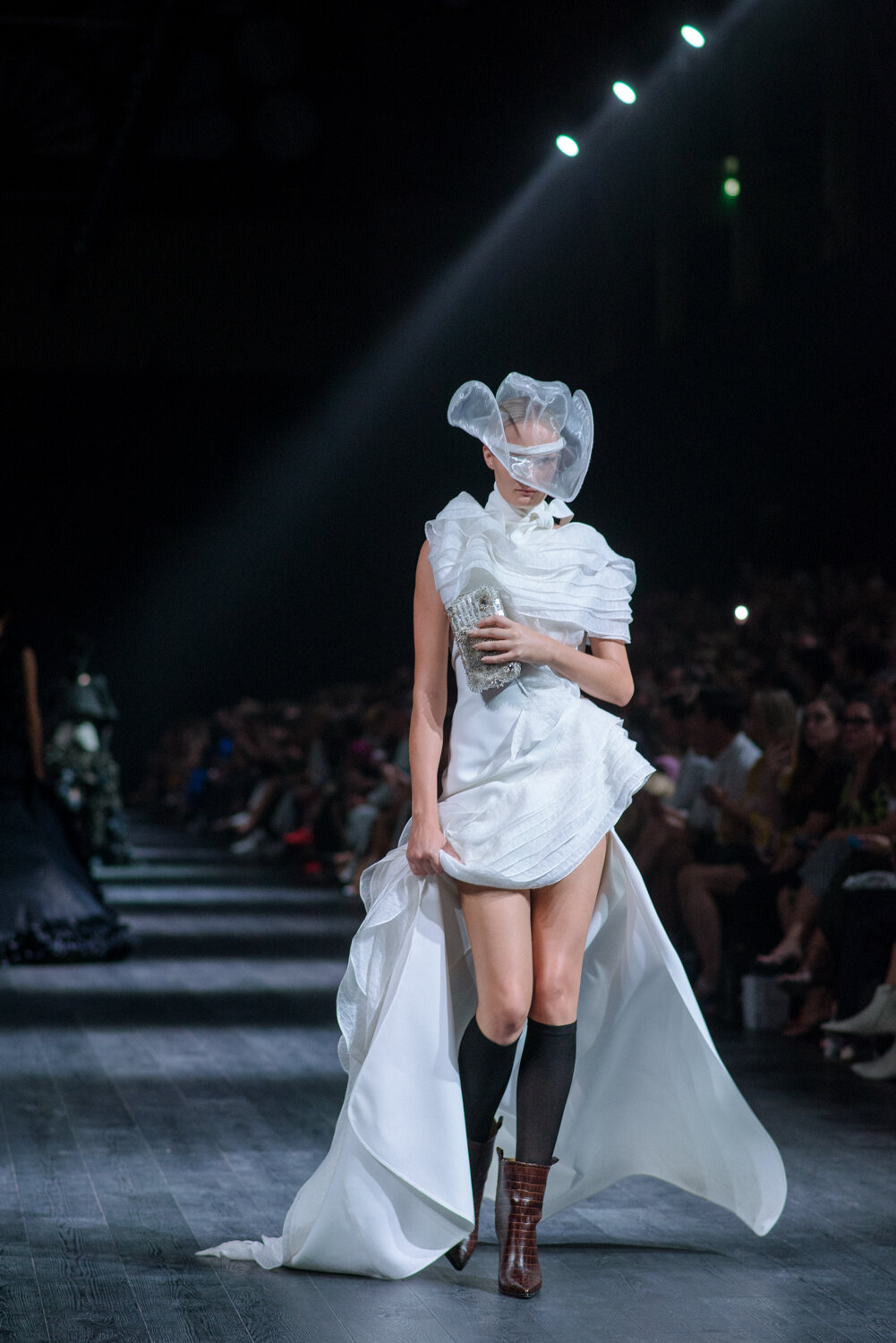 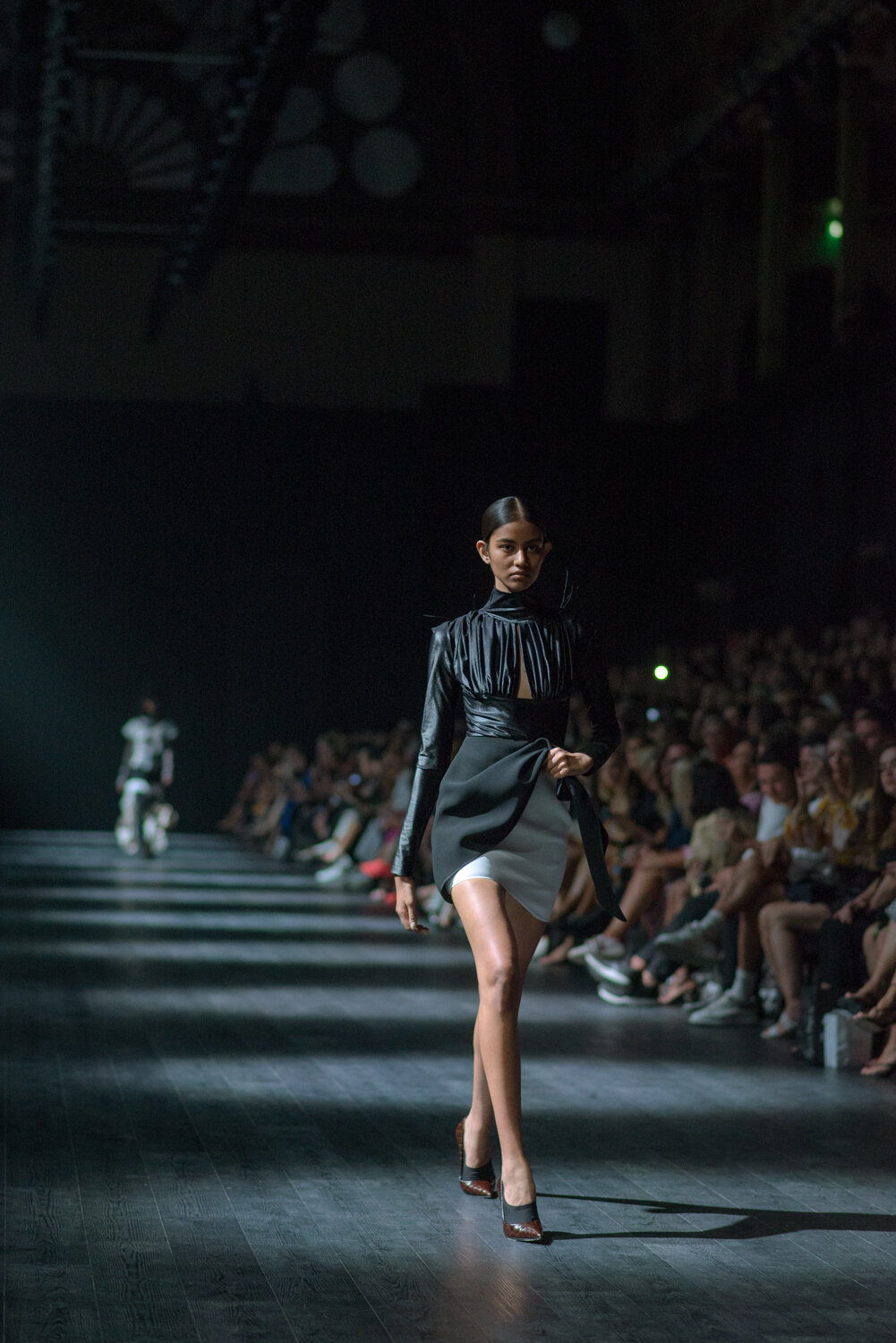 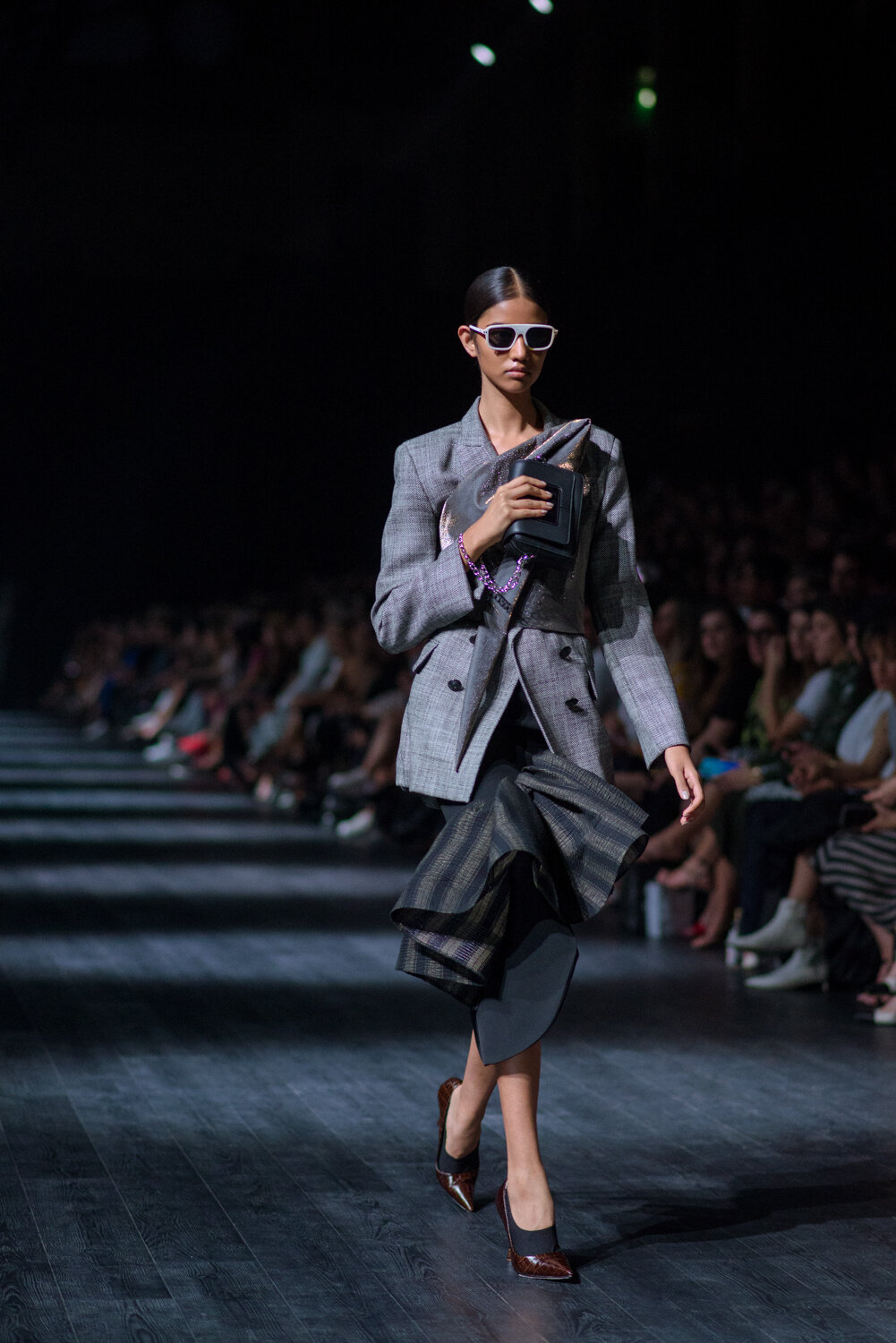 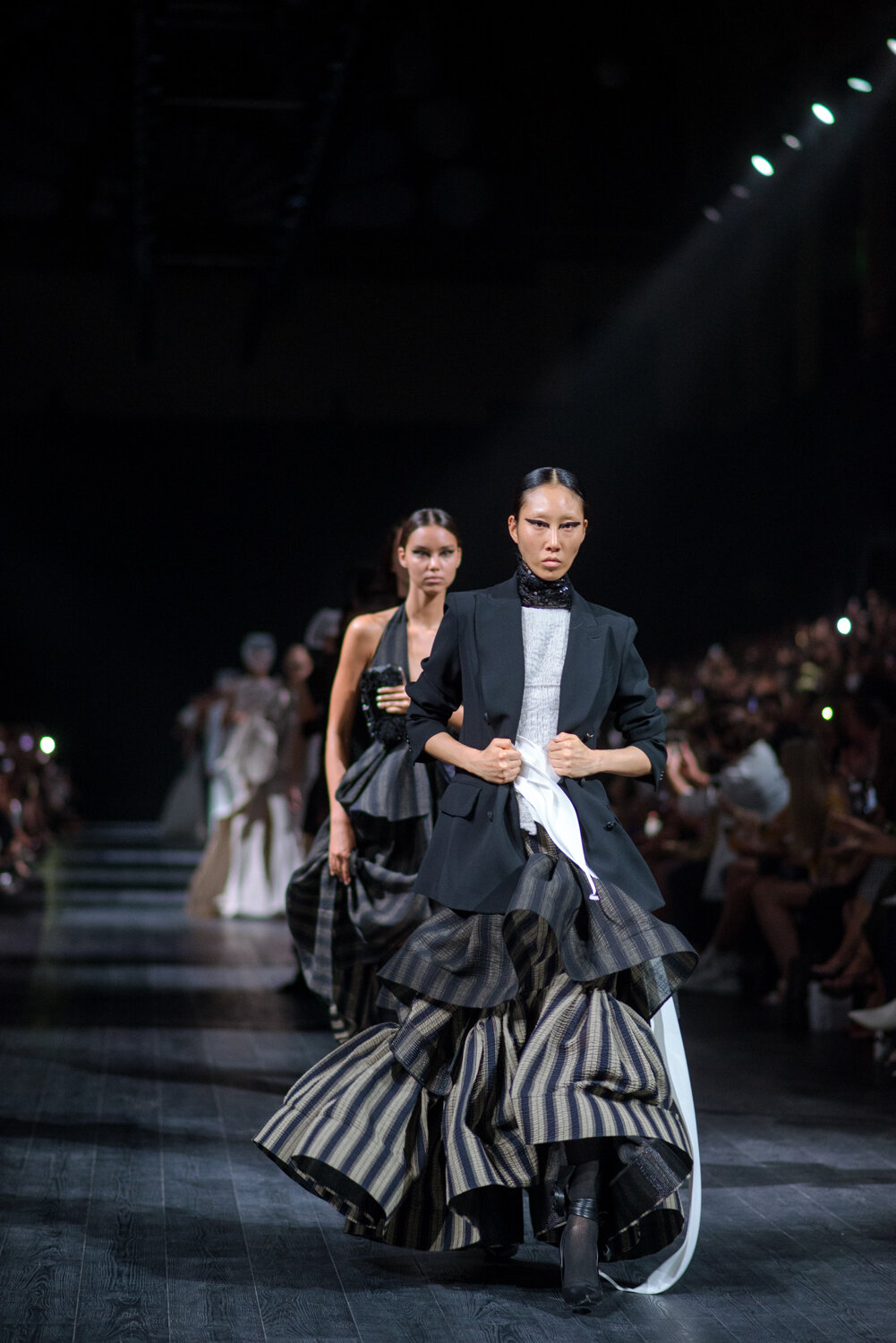 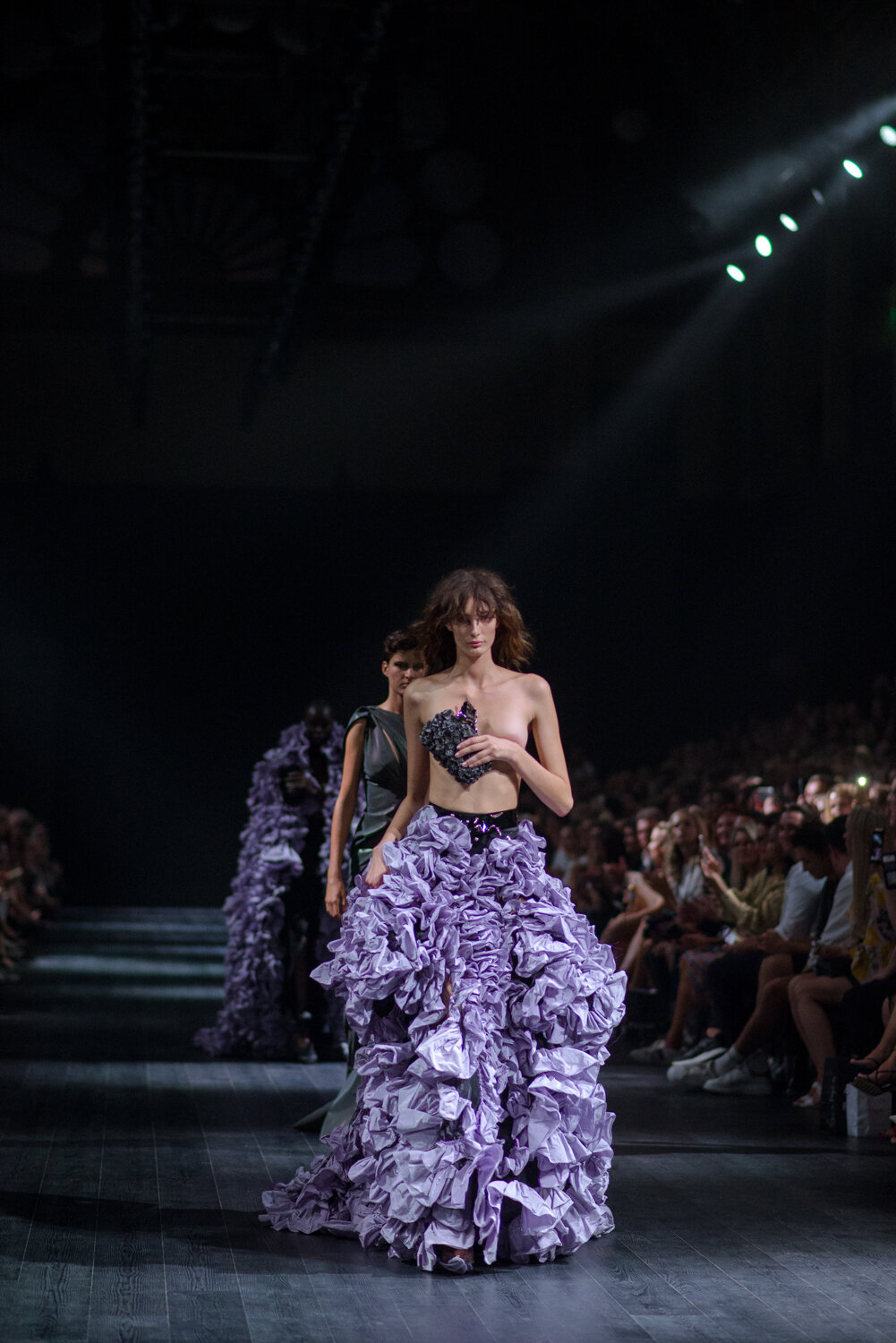 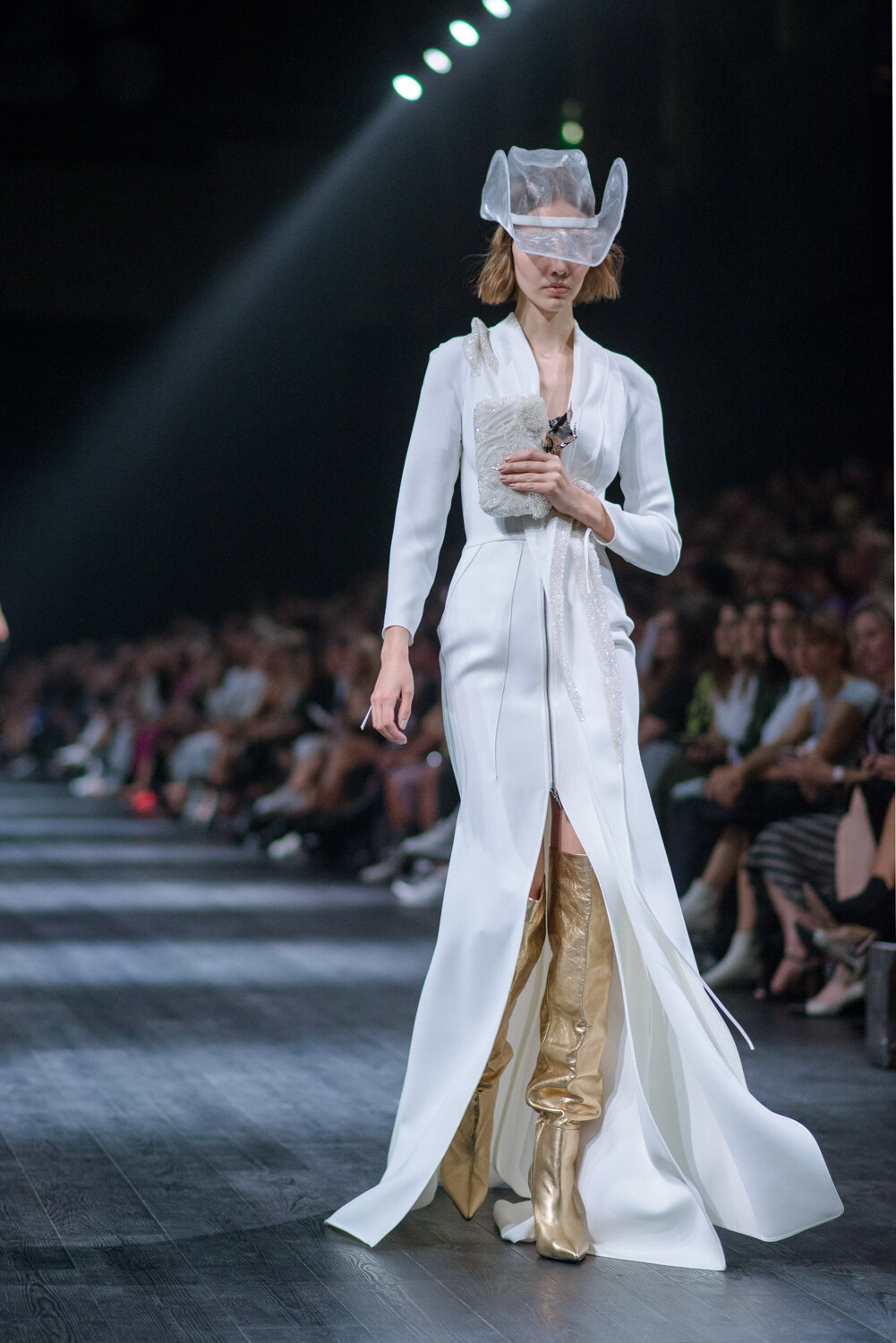 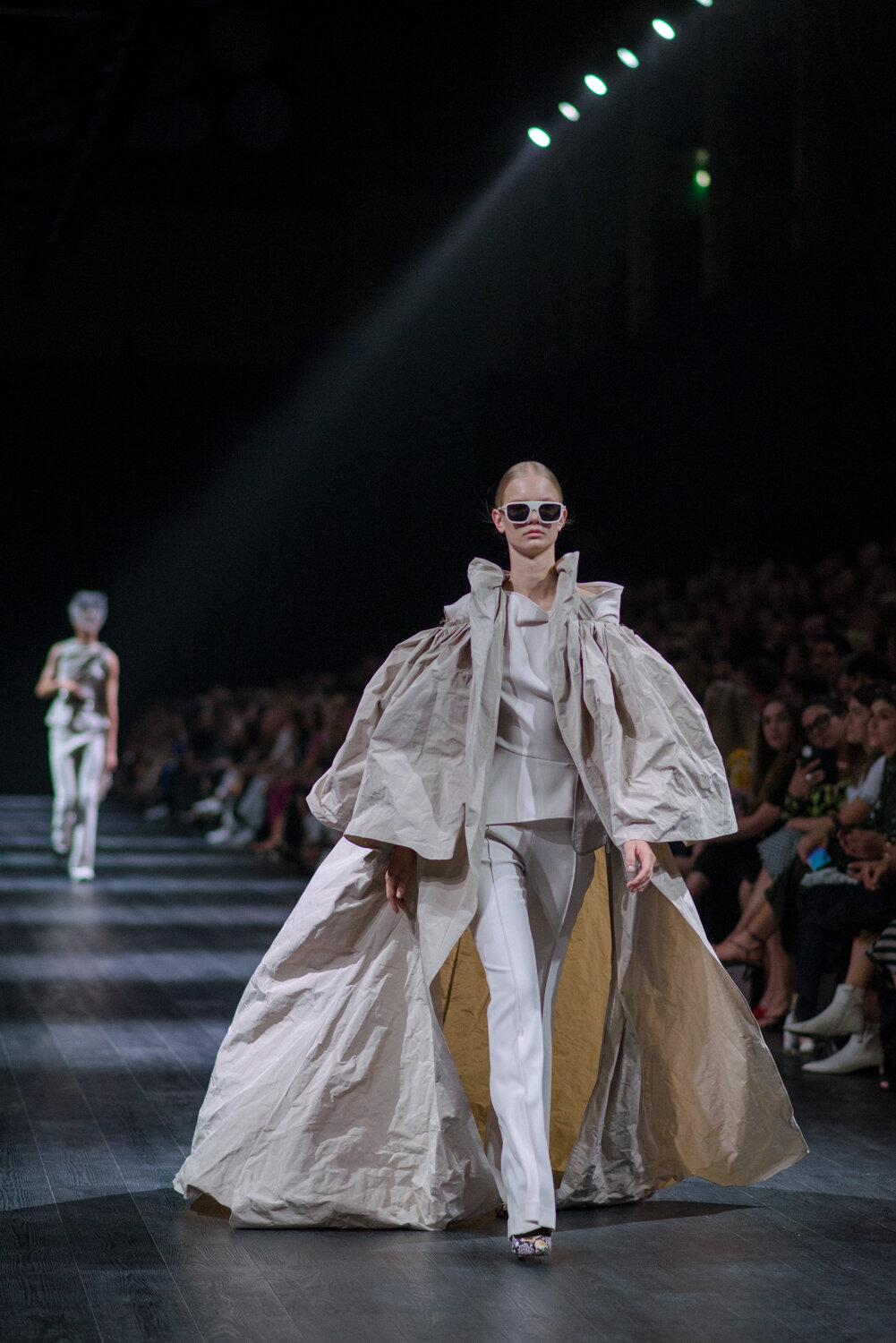 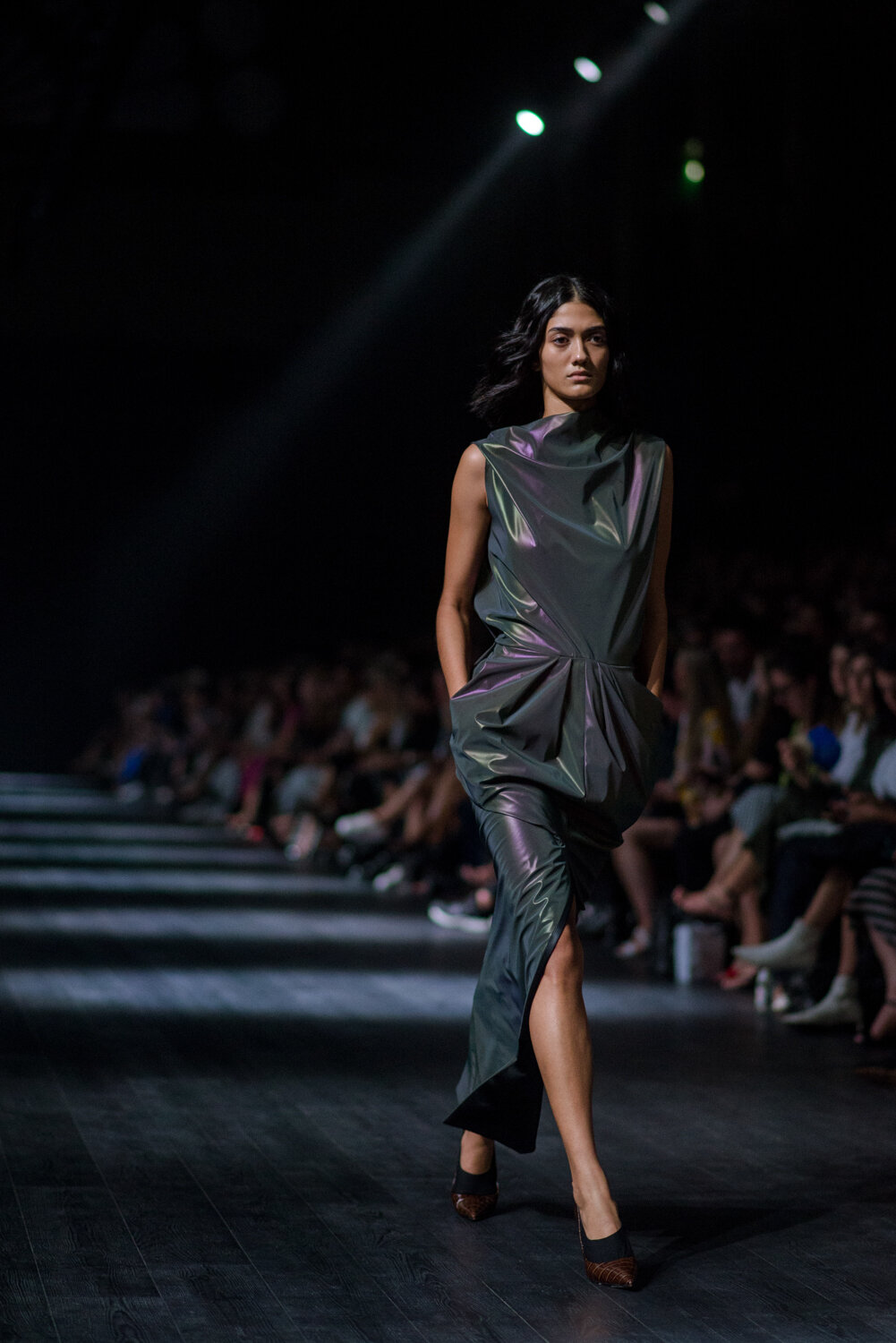 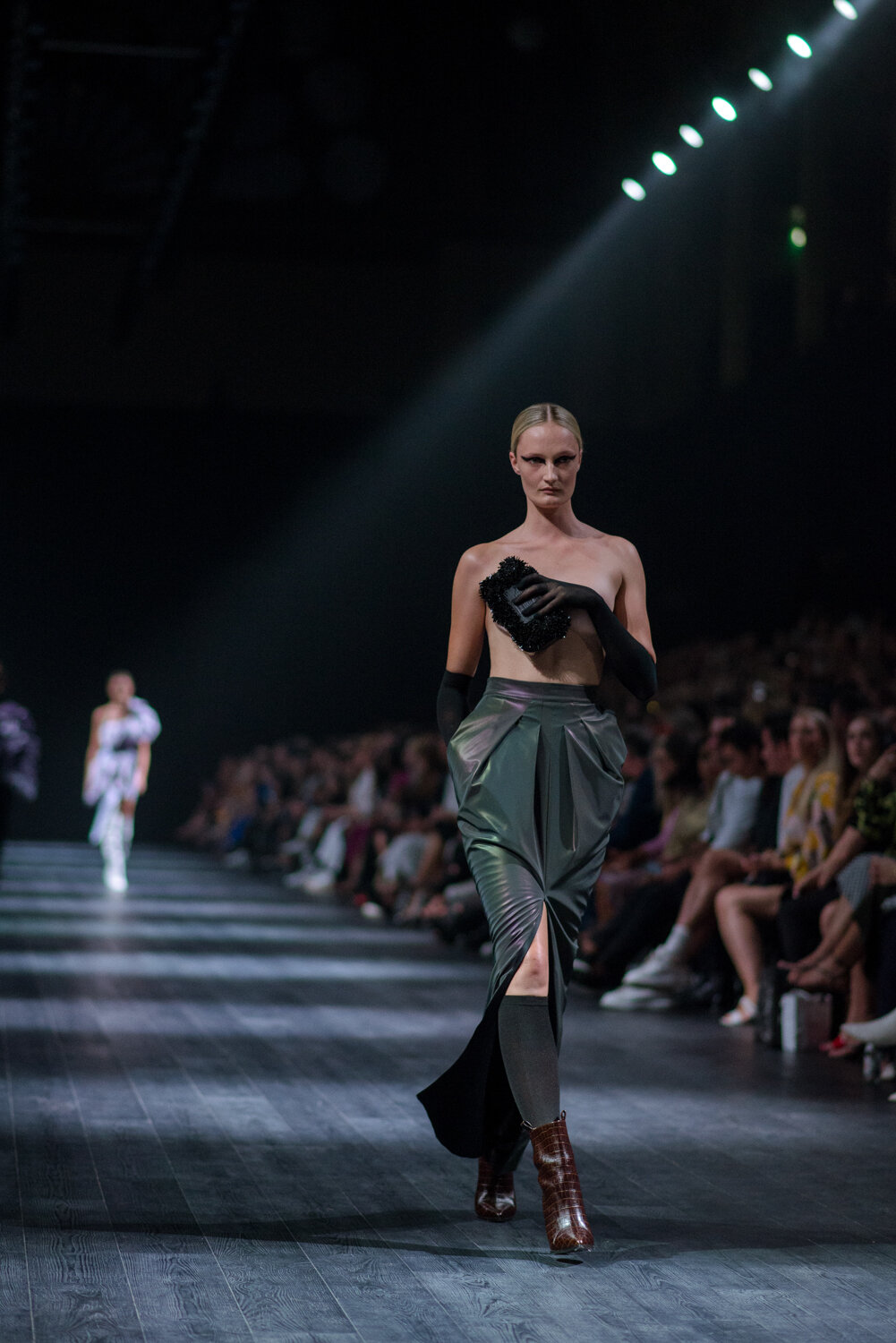 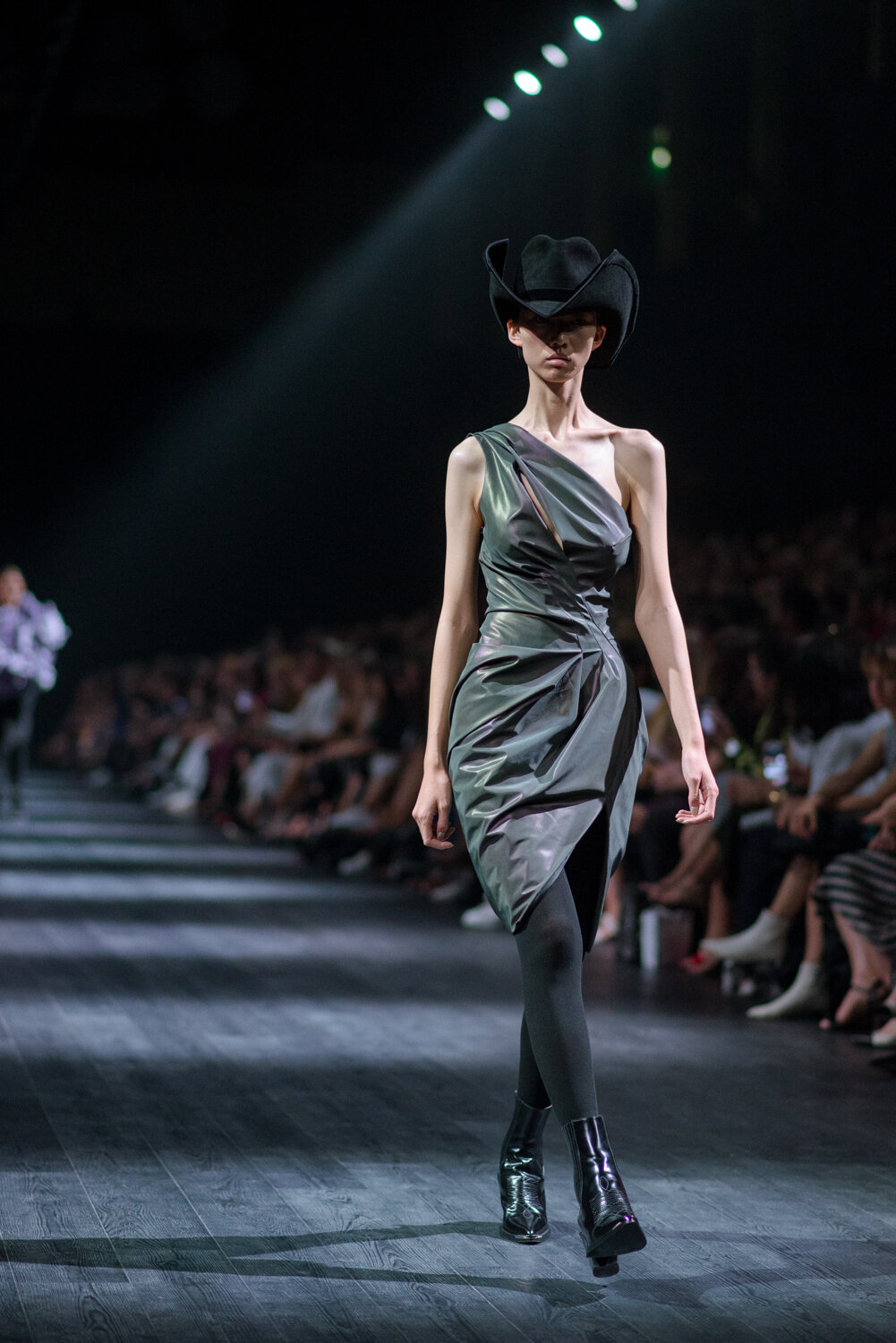 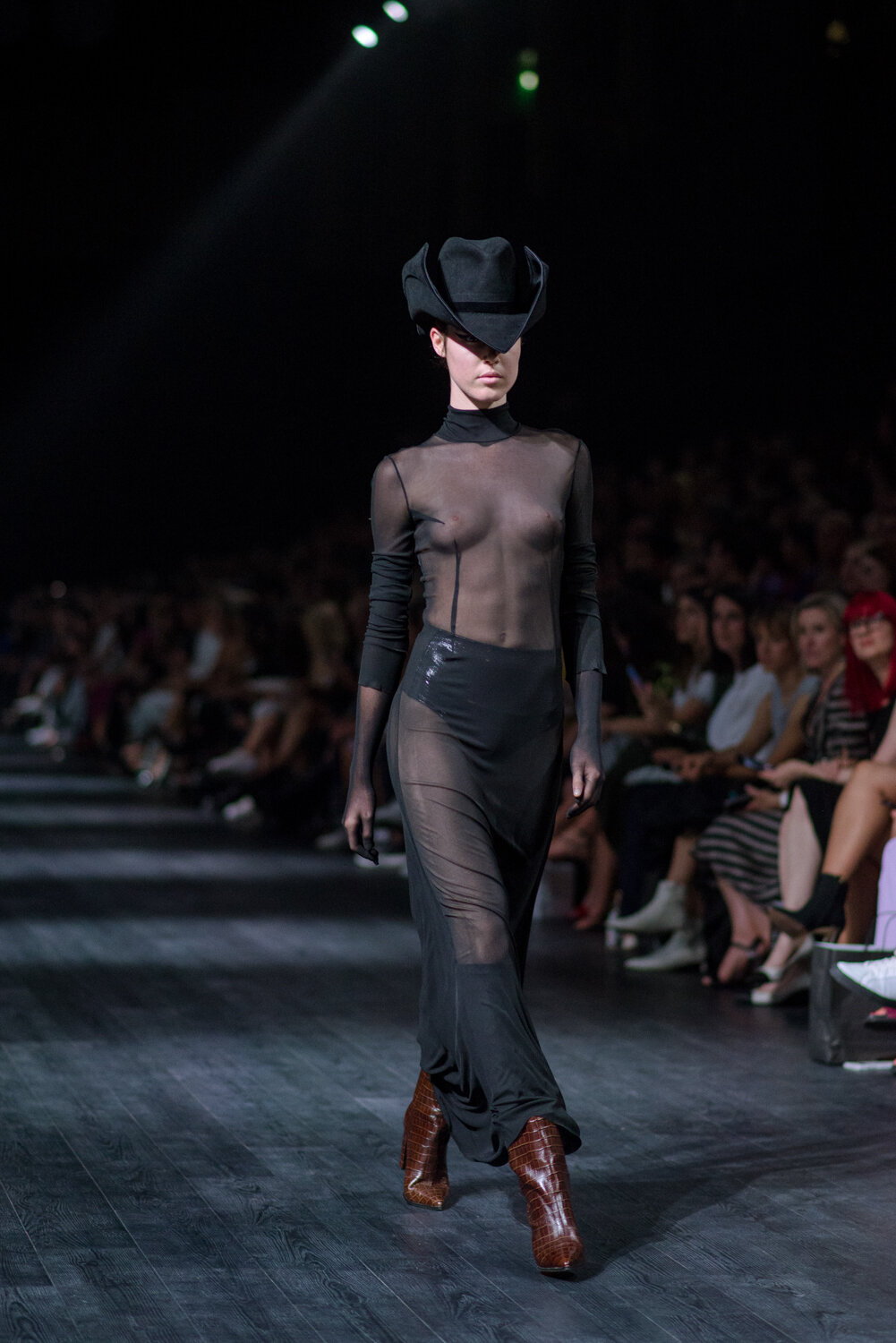 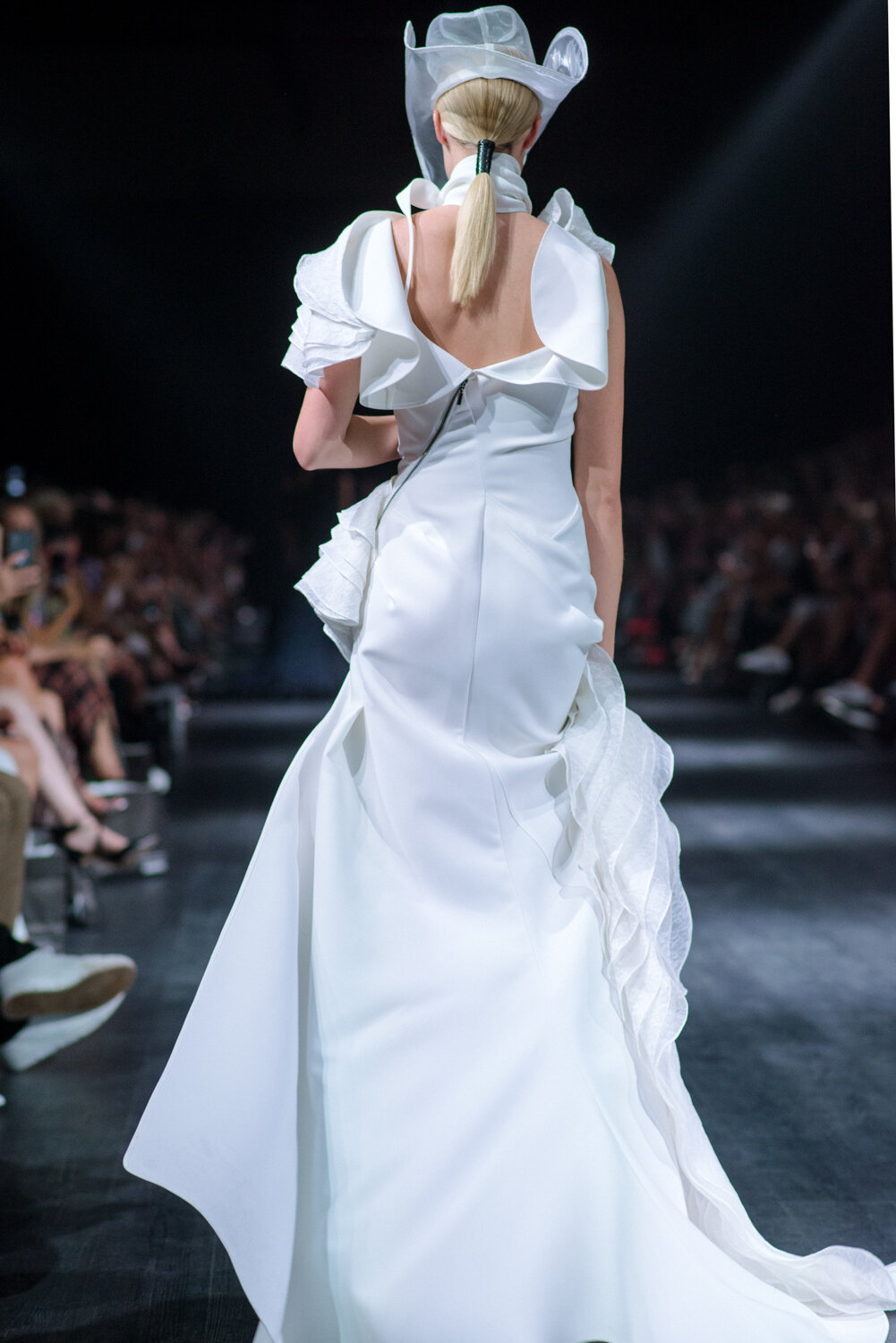 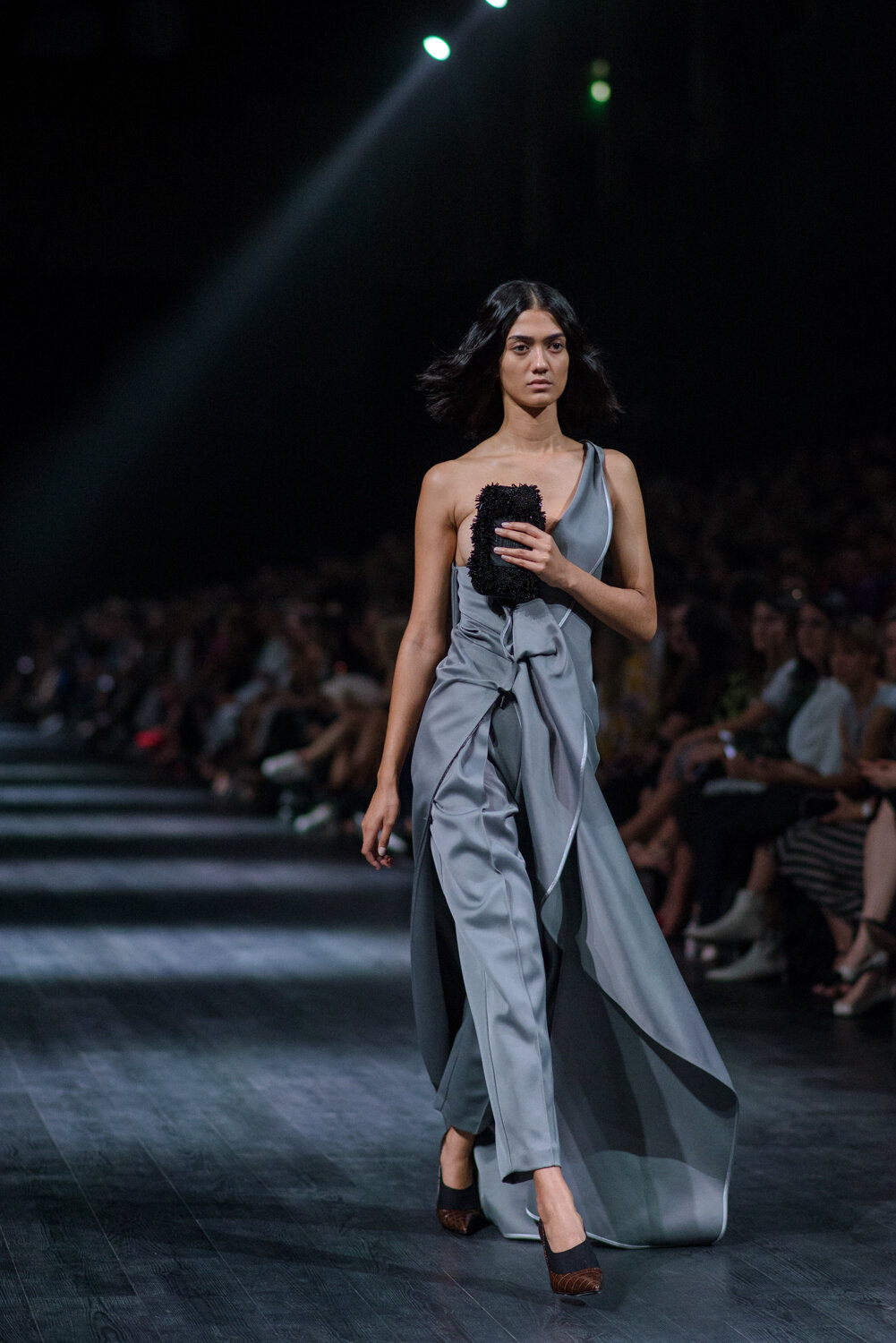 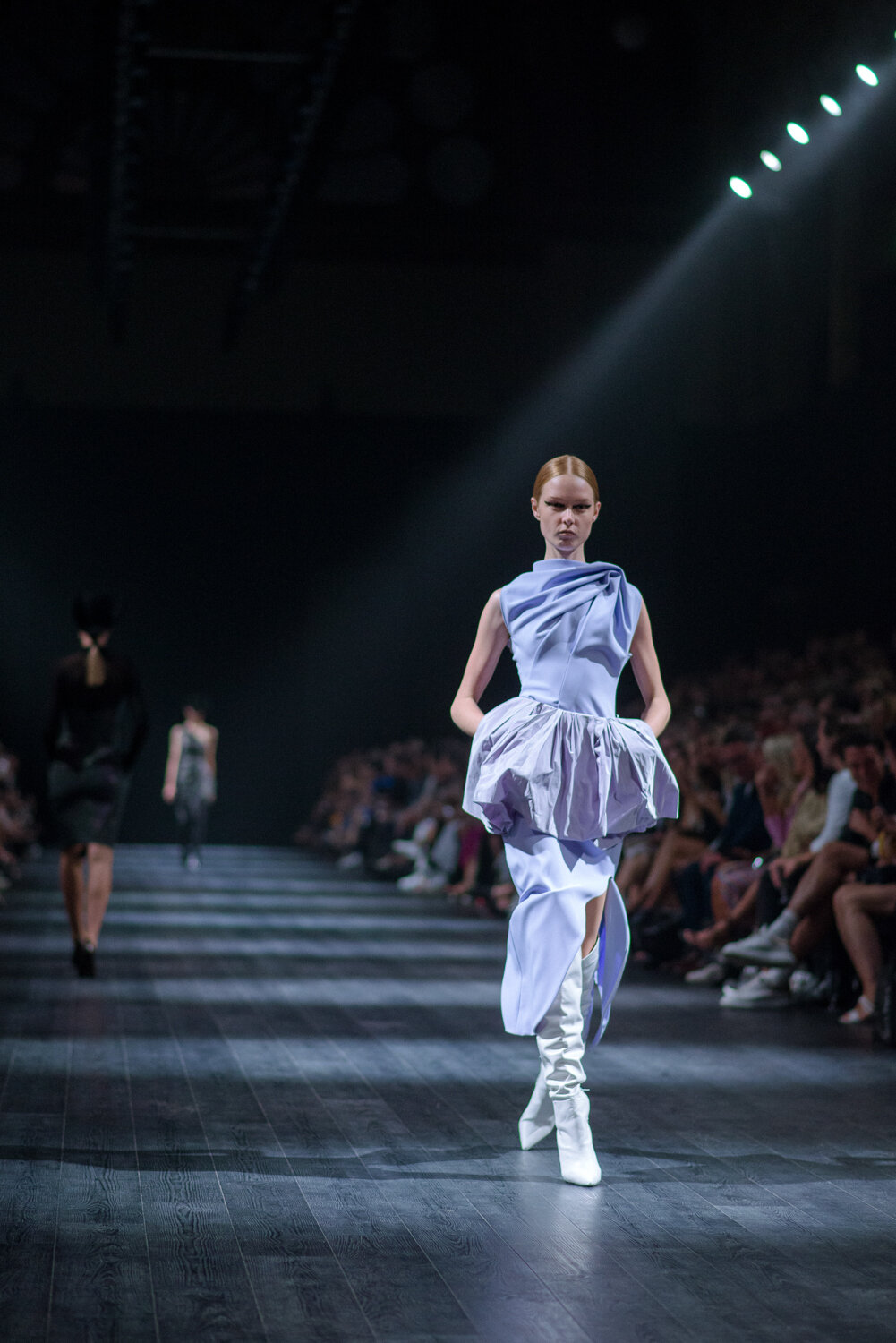 I couldn’t help but notice how incredibly passionate he is about his work and his shows… His commitment to his craft is astoundingly clear.

As for Maticevski’s nervousness, it was clearly unfounded: his showcase was an incredible success, with remarkable outfits following one after another along the runway. The ornate backdrop of the Royal Exhibition Building was a perfect counterpoint to Maticevski’s largely monochrome collection, which featured striking silhouettes in black and white, accented by iridescent and metallic materials. Renowned for structure in his work, the designer exhibited garments with clear form, but never lost the femininity characteristic of his collections; indeed, androgyny was a key theme of the show as male models exhibited exquisite, trailing gowns. The dimmed lighting and moody, ethereal music capped off the transportive atmosphere, leaving the attention on the runway in an almost hypnotic pull.

While the overall profiles of Maticevski’s collection were all similarly arresting, the shapes themselves varied widely, with contrasts between close-cut or heavy fabrics and lighter, flowing materials creating a fascinating textural mosaic. Throughout the show, some pants seemed to be made almost out of thick plastic, while a huge, ruffled dress resembled a cutting of lilac floating along the runway. The trains on some gowns gave the outfits gradients of drama, complemented elegantly with billowing shoulders and collars on other outfits. What became most clear throughout the show is that Maticevski is a master of balance, weaving an intricate narrative throughout a vastly diverse collection of forms.

Toni Maticevski’s solo Grand Showcase exemplified the designer’s strengths in cohesive, sophisticated collections that are nevertheless forward-thinking. The variety found throughout the show never seemed out of place, with the designer masterfully striking a certain symmetry across the collection. The Casper & Casper team was delighted to have seen his showcase this VAMFF, and we look forward to the designer’s next accomplishments, wherever they may be.

To learn more about Toni Maticevski, visit his website here.