‘Visualising the unseen’: Japan Supernatural at the AGNSW

Goblins, ghosts, and shapeshifters are on display at the Art Gallery of NSW in Japan Supernatural, an exhibit featuring over 180 works from Japanese artists between the eighteenth century and the present.

The paintings, installations, carvings, and prints are exemplars of the country’s supernatural tradition, exploring Japanese folklore, history, and political commentaries through the past centuries.

Perhaps the most well-known contemporary artist in the collection is Takashi Murakami, whose painting Japan Supernatural: Vertiginous After Staring at the Empty World Too Intensely, I Found Myself Trapped in the Realm of Lurking Ghosts and Monsters (2019) was commissioned specifically for the exhibit. Spanning three by ten metres, the work features a massive cat surrounded by samurais and yо̄kai (supernatural beings), encapsulating the diversity of the exhibition in one statement piece. The painting is the biggest acquisition in the AGNSW’s international collection, standing in contrast to the small prints and carvings of the nineteenth century.

Much of the exhibition is comprised of ukiyo-e (floating world) art, which became common during the Edo period  of Japan’s history (1603-1868). Artists include Utagawa Kuniyoshi, one of the most prolific of the Edo period; Kawanabe Kyōsai, renowned for his shogakai painting parties; and Utagawa Kunisada, who sparked the Genji-e genre. Each artist brings his own style to the genre, with colour, form, and subject all distinct; for instance, the busy visuals of Kyōsai’s School for spooks (Bakebake gakkō) no. 3 (1874) contrasts starkly with the precise simplicity of Tsukioka Yoshitoshi’s works, where wide expanses of colour and negative space dominate.

Styles within the exhibition are as diverse as the yōkai and yūrei depicted, with many of the shapeshifters and ghosts stemming from detailed traditional narratives. Depicted in an 1858 woodblock print by Utagawa Yoshitsuya, the Shuten-dōji (drunken demon) is one of Japan’s most famous legends, in which the titular demon kidnaps and eats young women in Kyoto. The heroic Minamoto no Yorimitsu (Raikō) disguises himself and his attendants as Buddhist monks and gains entry to the demon’s lair, successfully defeating the Shuten-dōji. Other creatures to be found in the exhibition are the tanuki (raccoon-dog), kitsune (fox), and tsuchigumo (earth spider), alongside famous ghost stories like Oiwa and Okiku. Each artwork has a fascinating story to tell, conveying the wonder, mystery, and horror of Japanese folklore. 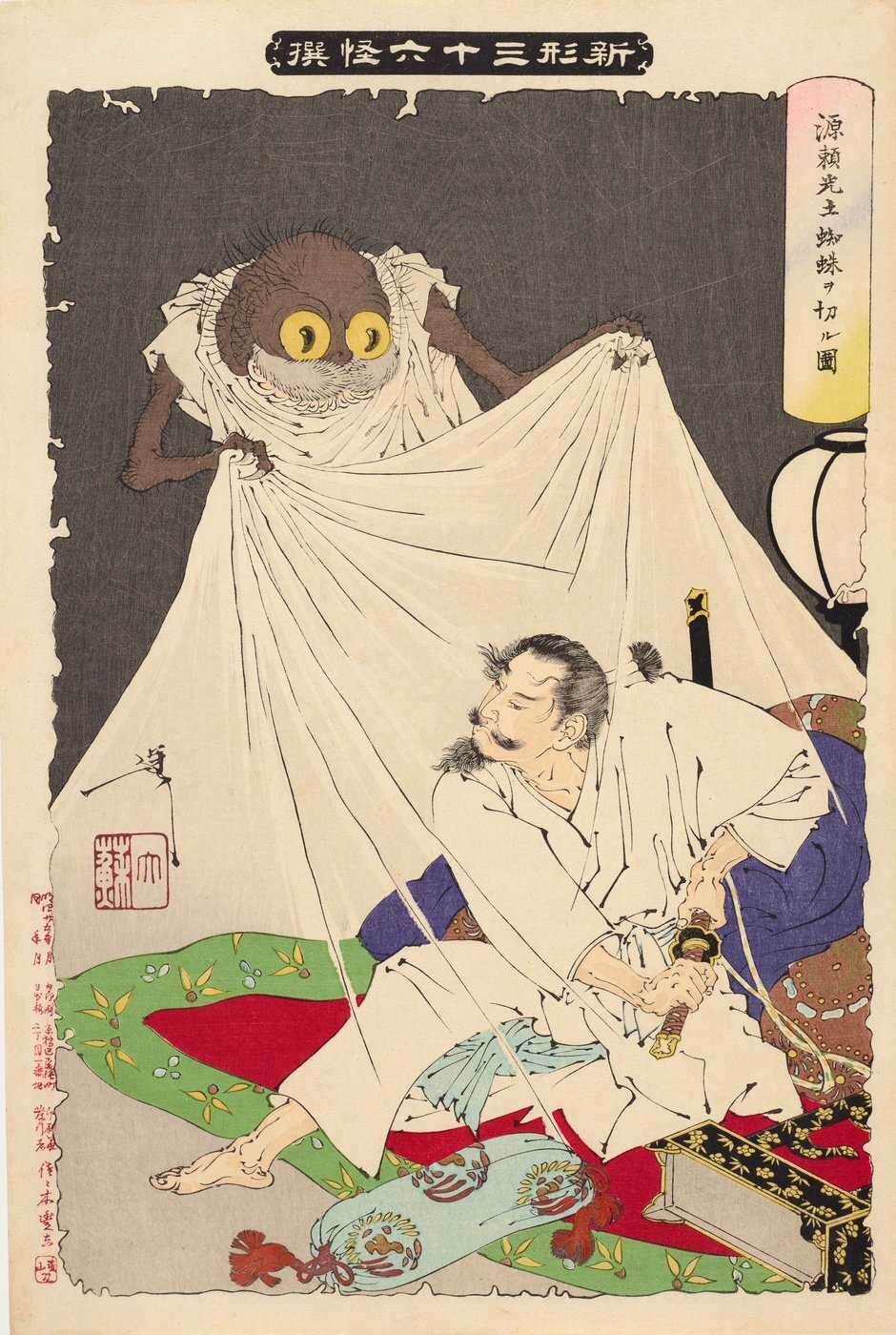 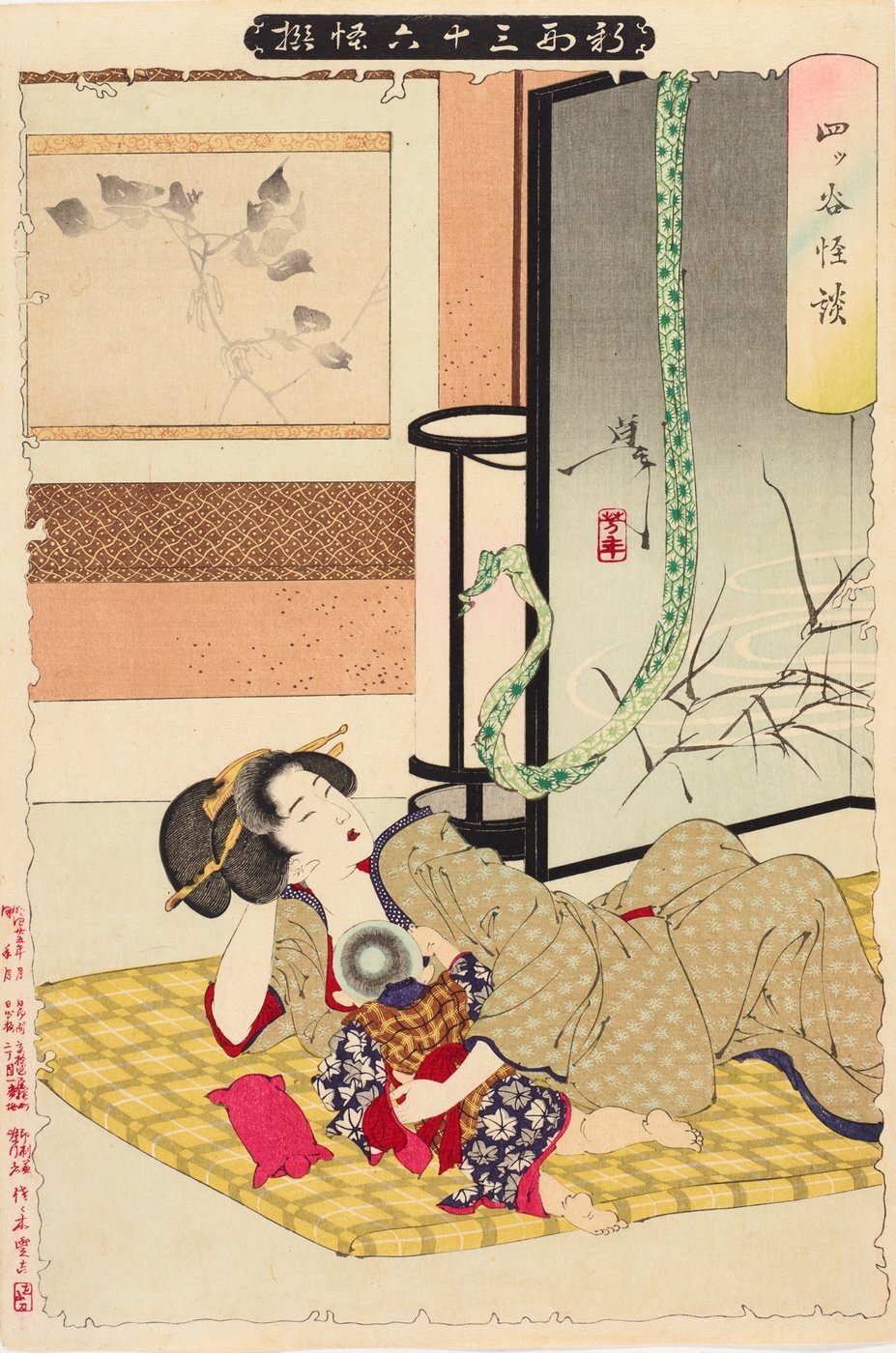 Japan Supernatural is the perfect opportunity to learn more about Japanese history, art, and culture, presenting some of the best works of the past few centuries. Running November 2 2019 – March 8 2020, the exhibition is a unique foray into international folklore, and we at Casper & Casper hope to see more exhibits like it at our local galleries.