The Wonders of Exploration: The Yingliang Stone Natural History Museum

The Yingliang Stone Group in Xiamen, China have found a creative way to open their work to the public.

Years of excavations have resulted in their private archaeological team compiling quite the collection of fossils, from insect amber to dinosaur eggs, which the manufacturers plan to display in the new Yingliang Stone Natural History Museum built right into their offices. New York- and Beijing-based Atelier Alter Architects have renovated the building’s atrium and first two floors into a striking stone museum, creating a space that aims to ‘bridge the gap between industry and culture’.

The revamped space pays homage to the natural structures and shapes that surrounded the artefacts when they were originally found, building a sense of history and adventure directly into the museum’s design. The new gallery spaces are carved out of the building in the shape of long crystals, stretching both horizontally, to form the museum’s corridors and showrooms, and vertically in the main room, to form high ceilings that highlight a grand sense of scale. This abstract inspiration means the building is full of asymmetrical walls and pillars, a design that is also reminiscent of the organic feeling of cave corridors. Alongside the cool grey colouring of the walls, floor, and pedestals used to display the archaeological finds, these shapes make visitors feel as if they are exploring underground, discovering millions of years’ worth of history for themselves.

Construction of these intricate shapes was so complex that architects had difficulty expressing the design on a traditional two-dimensional grid plan. Instead, a three-dimensional coordinate system was used so that everyone participating in the renovation could more easily translate these ambitious shapes into reality. In a shining example of the success of this method, the design’s complex angles aligned to create an ‘anti-gravity’ pyramid suspended above the main foyer that the builders have expertly brought to life. The shape adds yet another layer of mystery and discovery to the museum’s design, creating what the architects call ‘an unknown space seemingly coming straight from a sci-fi film’. 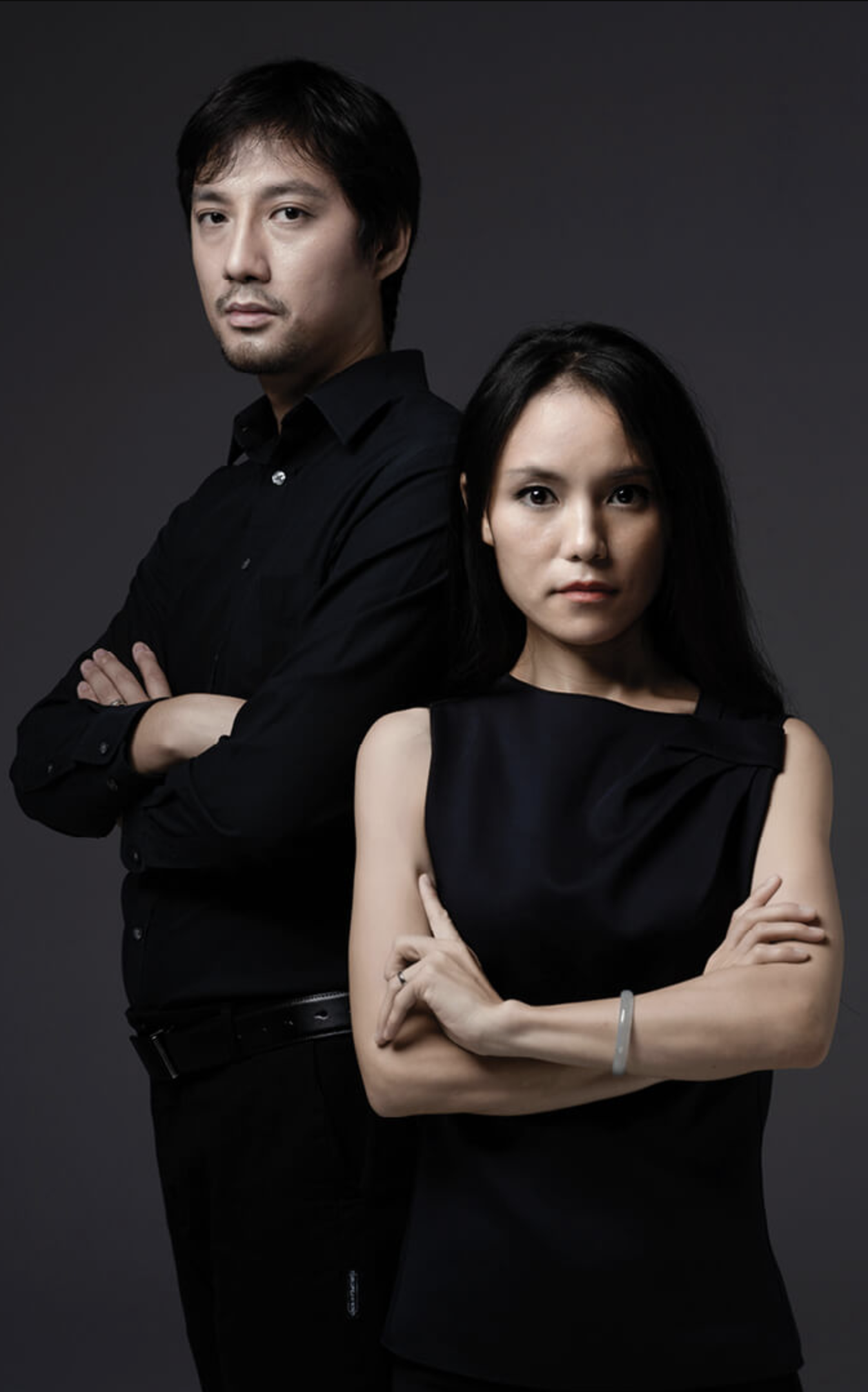 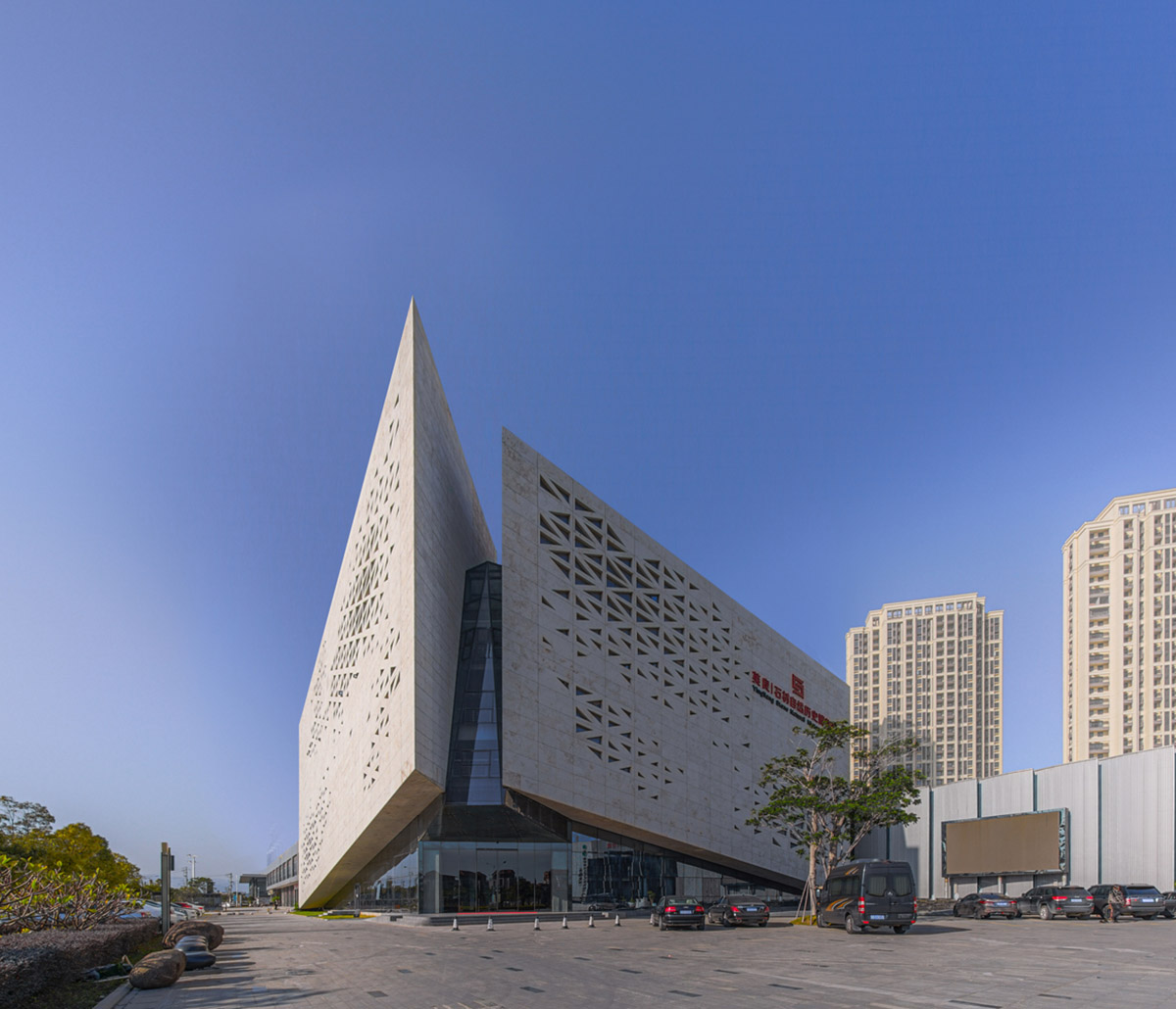 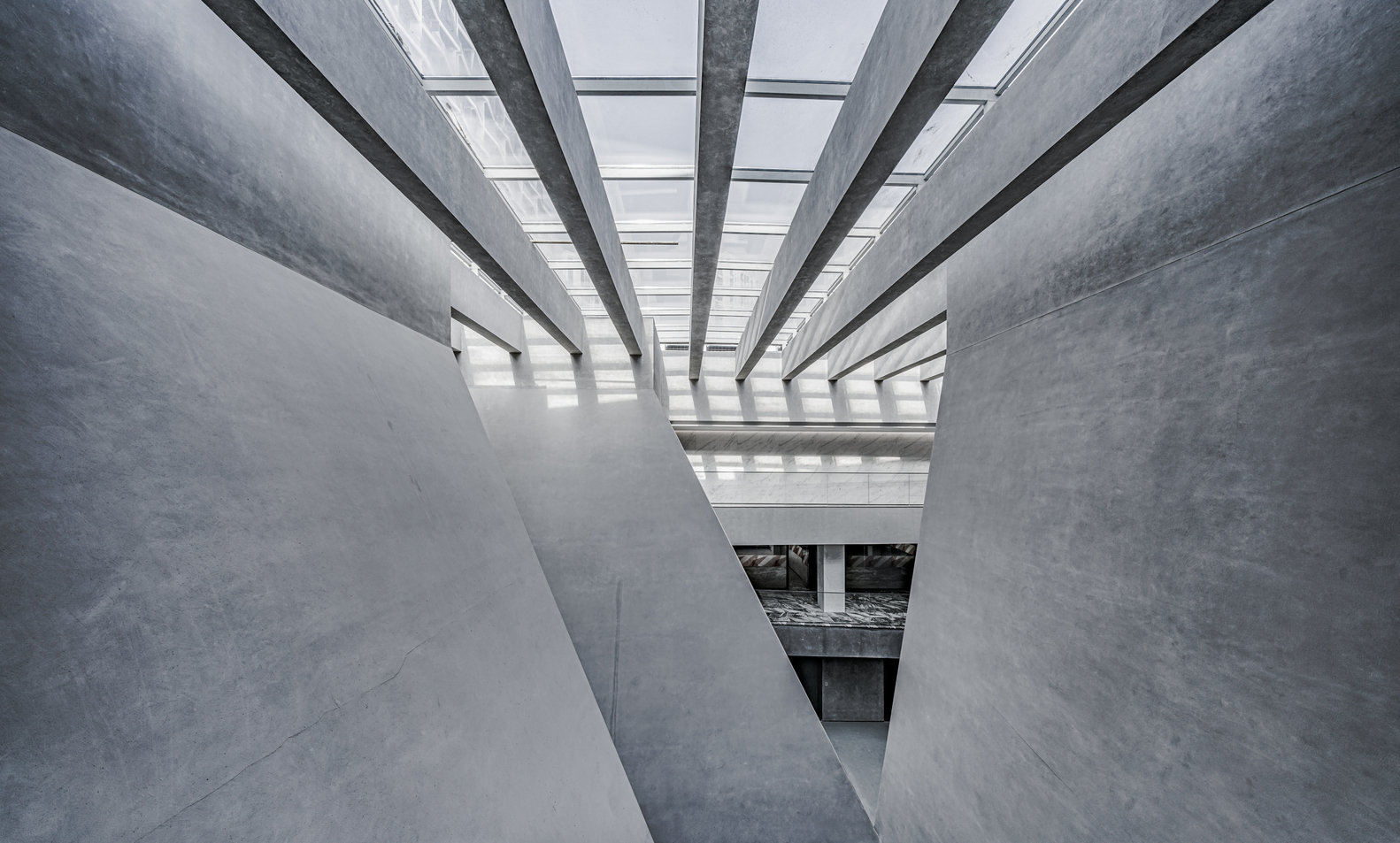 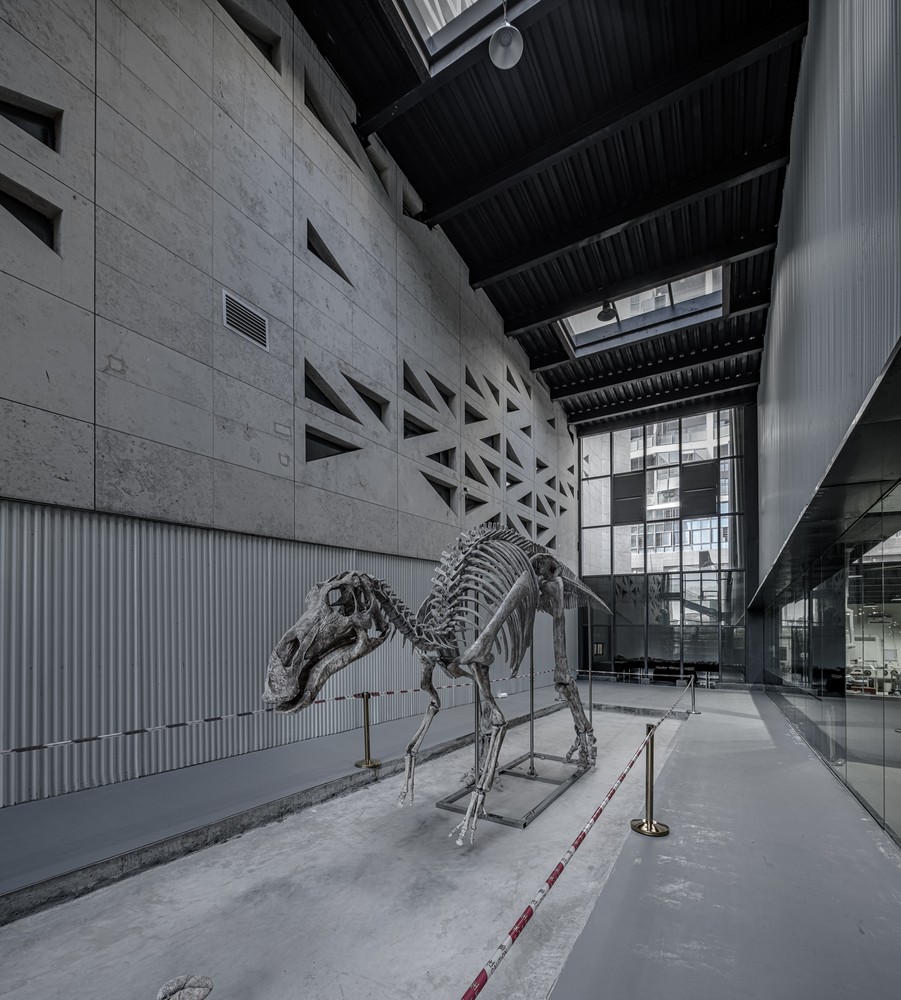 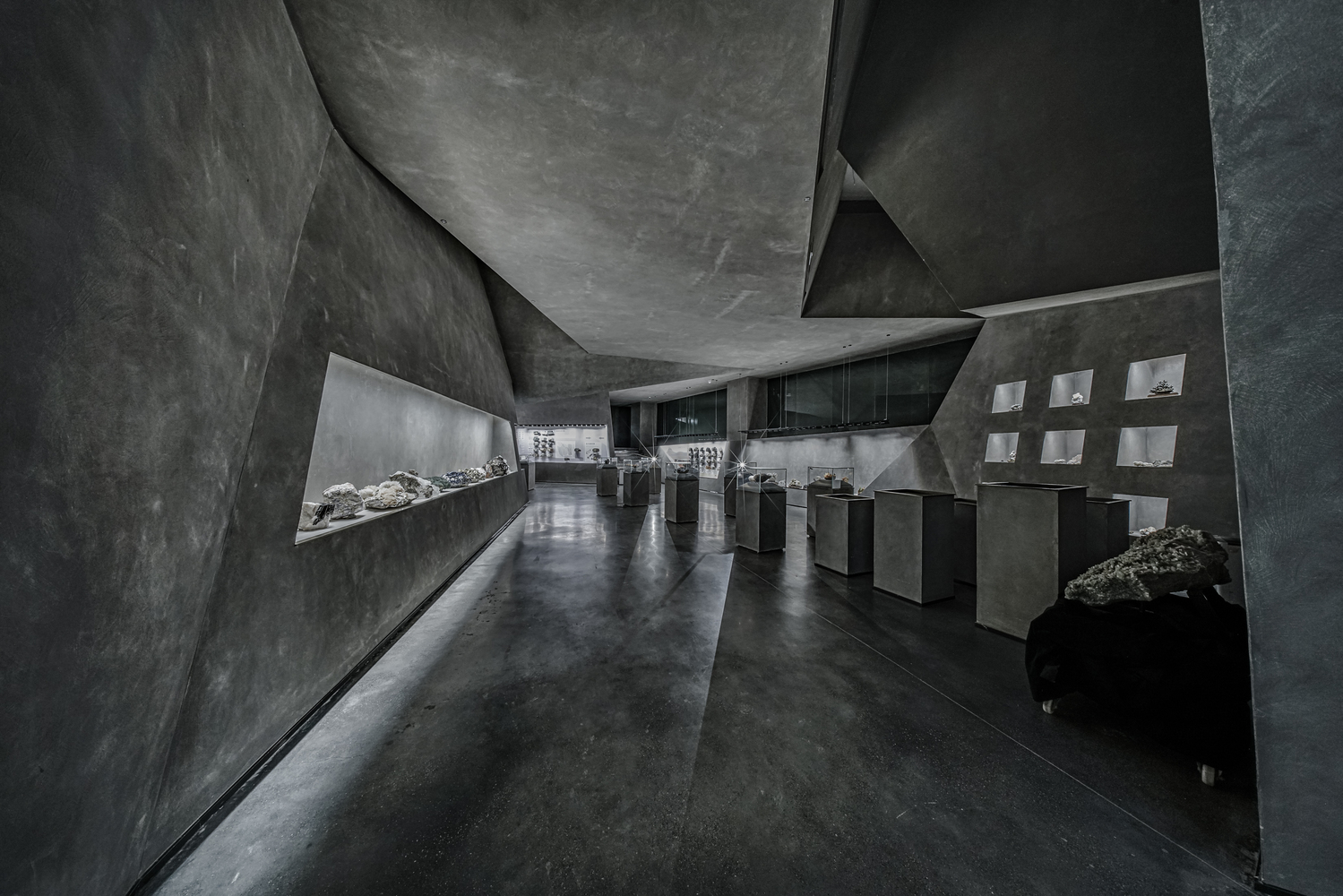 This hovering feature isn’t the only way example of the designer’s intelligent solutions in the museum’s central space. Previously the building’s only source of natural light, the atrium proved tricky to integrate into the new museum, as Atelier Alter Architects had to plan carefully to ensure not only that the exhibition spaces were lit correctly, but that the remaining offices on the building’s higher floors didn’t lose any light. By designing the vertical crystal shapes around an elongated, four-sided pyramid that pierces through the building from its fifth storey roof to the ground level’s skylight ceiling, the designers allowed the sunlight to filter through the building and shines ethereally across the muted walls. At its lowest point, the pyramid also reflects light back into the floors above, meaning the Stone Group’s administrative staff can continue using their offices to plan projects and excavations for the real caves nearby.

The design of the Yingliang Stone Natural History Museum embraces the spirit of the artefacts it displays by recreating the experience of exploration through winding stone caverns. The intricate and ambitious structure is a beautiful way to bring the natural wonders associated with the manufacturer’s projects to the public, perfectly complementing the fossils on display.

If you liked this article, you may enjoy our feature on the design of two new museums by renowned Japanese architect Tadao Ando. 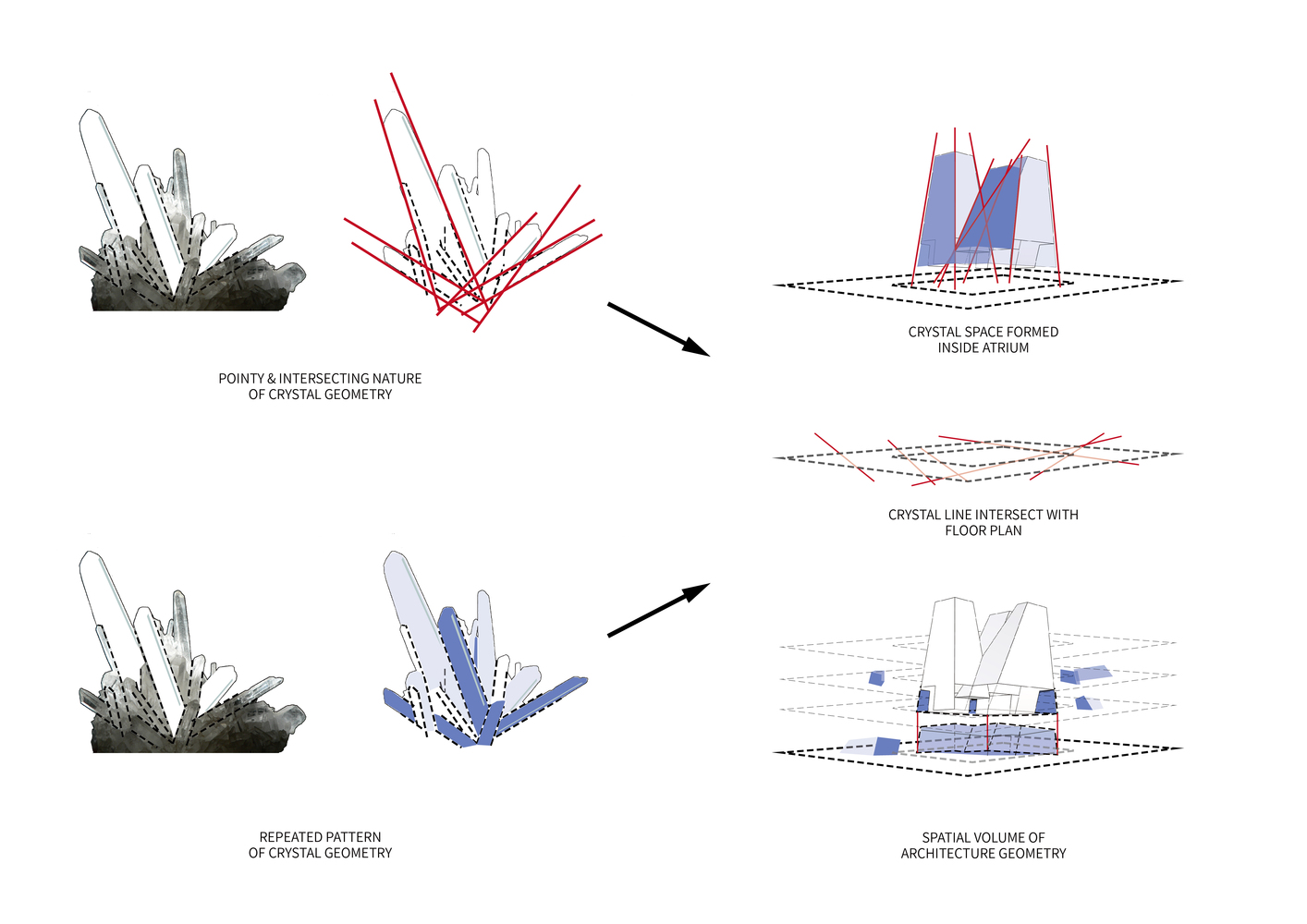